Russia Becomes World’s No. 1 Grain Producer, Leaves US, Canada Behind 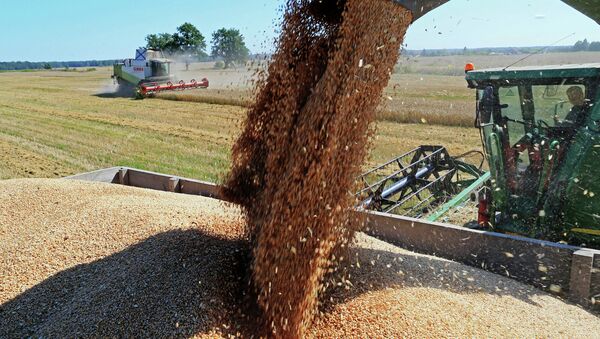 © Sputnik / Igor Zarembo
/
Go to the photo bank
Subscribe
According to the US Department of Agriculture, Russia now leads the US in the volume of grain exports, with 35 million tons exported in 2016, which is 3.5 million more than America US did, and exceeds by 2 million tons Canadian exports.

Russia to Harvest 106 Mln Tonnes of Grain in 2016
In 2014, the US was the world’s No. 1 grain exporter, followed by Canada and Russia, which has now moved to the first place.

Russia sells grain to 130 countries, above all Egypt, Turkey and Iran. This country’s grain exports considerably increased in 2002 making it one of the top ten grain exporters around.

In 2016 Russia, for the first time in its modern history, topped the list of the world’s leading grain exporters.

“A strong US dollar did play a part in this adding to the cost of US grain exports and enabling Russia to clinch deals to sell wheat to such traditional buyers of American grain as Nigeria and Mexico,” Russian Grain Union Vice President Alexander Korbut told Sputnik.

Korbut said that, barring bad weather, Russia was likely to maintain its lead into the next year.

Russia expects to take in some 64 million tons of wheat with the total grain harvest estimated at between 106 and 111 million tons.

This means that this year’s harvest could exceed the previous record of 108.2 million tons taken produced in in 2008.

This is a recurring trend across most of the agricultural sectors with  poultry and pork meat production accordingly tripling and doubling since 2006.

Western economic sanctions, imposed on Russia over its alleged role in the armed conflict in eastern Ukraine, have played right into the hands of Russian farmers.

In 2015 the export of excessive agricultural produce earned Russia a record $20 billion, more than the sale of arms. Simultaneously, food imports dropped by a hefty 40 percent.

000000
Popular comments
A major difference is that Russian wheat is natural and clean, US and Canadian are entirely or semi-manipulated with GMO.