Lavrov on Kerry's Statements: Russia Gave No Promises to Anyone on Syria 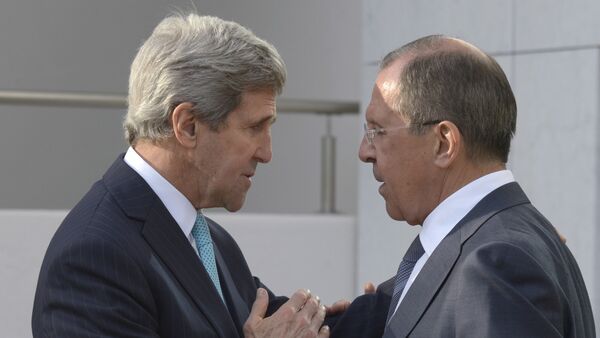 © Sputnik / Eduard Pesov
/
Go to the photo bank
Subscribe
Russia has given nobody any promises regarding Syria, Russian Foreign Minister Sergei Lavrov said Thursday commenting on recent statements by US Secretary of State John Kerry.

ST. PETERSBURG (Sputnik) — Kerry stated earlier in the week that Russia must understand that Washington has "very limited" patience left in regard to Syria ceasefire violations.

The foreign minister said he was surprised by Kerry's statements and urged the United States to show more patience in regard to Syria.

"First of all, we have not promised anyone to do anything. We have given no promises to anyone, but agreed that everyone working on the Syrian settlement will be guided by agreements reached by the International Syria Support Group, which have been written down in UN Security Council Resolutions," Lavrov said at the St. Petersburg International Economic Forum (SPIEF).

Russia, Syria Lead Fight to Free Raqqa from Daesh, US-Backed Forces Retreat
The US-Russian brokered ceasefire entered into force on ceasefire agreement came into force across Syria on February 27. Terrorist organizations such the Daesh and al-Nusra Front are excluded from the truce.

Russian Foreign Minister Sergei Lavrov urged the US earlier this month to convince those rebel groups which they support in Syria to leave areas where al-Nusra Front militants are present.

It is Washington's fault, not Moscow's that those taking part in the Syrian settlement have failed to sit down at the negotiating table so far, Lavrov said.

"Ensuring that these people sit down at the [negotiating] table, in full compliance with a clear [UN] Security Council mandate, has been impossible, and not because of us, but because of our American partners who for some reason are unwilling to pressure their allies in the region, and these allies have categorical stances."

Ban Ki-moon: UN Fully Supports Coalitions Fighting Against Daesh in Syria
According to the minister, there is no progress on Syrian political settlement as it has been impossible to gather all groups that should be represented.

"There is no progress in the political process. The reasons we are hearing — I just met with the UN secretary general and his special Syria envoy Staffan de Mistura, we had a frank talk — they cannot launch a political dialogue with the participation of all Syrian parties," the minister stated.

"The Turks are not letting in the Kurds, and the so-called High Negotiations Committee refuses to recognize the members of other opposition groups as equals and demands to be named the main negotiator," he added

000000
Popular comments
What can you expect? The US, as its criminal policy falls in tatters, is now outright lying about the situation, expressly saying Russia isn't holding up their end of the bargain? Well, who's actively supporting known terrorist groups in Syria? The USA! The pot calling the kettle black!

Matrix 68
16 June 2016, 15:25 GMT9
000000
"First of all, we have not promised anyone to do anything. We have given no promises to anyone, but agreed that everyone working on the Syrian settlement will be guided by agreements reached by the International Syria Support Group, which have been written down in UN Security Council Resolutions," Lavrov said at the St. Petersburg International Economic Forum (SPIEF). -- Even Sputnik has been pushing the lie that Russia made some kind of deal with NATO barbarians. The lie seemed coordinated with Russia's peaceful action of pulling some military out and doing everything possible to remove NATO excuses to continue to destabilize Syria. But the CIA takes every peaceful gesture from Russia and tries to use it as a weapon. The more Russia retreats symbolically to promote peace, the more NATO savagely advances.
jas
16 June 2016, 15:34 GMT5
000000
Newsfeed
0
New firstOld first
loader
LIVE
Заголовок открываемого материала
Access to the chat has been blocked for violating the rules . You will be able to participate again through:∞. If you do not agree with the blocking, please use the feedback form
The discussion is closed. You can participate in the discussion within 24 hours after the publication of the article.
To participate in the discussion
log in or register
loader
Chats
Заголовок открываемого материала
Worldwide
InternationalEnglishEnglishMundoEspañolSpanish
Europe
DeutschlandDeutschGermanFranceFrançaisFrenchΕλλάδαΕλληνικάGreekItaliaItalianoItalianČeská republikaČeštinaCzechPolskaPolskiPolishСрбиjаСрпскиSerbianLatvijaLatviešuLatvianLietuvaLietuviųLithuanianMoldovaMoldoveneascăMoldavianБеларусьБеларускiBelarusian
Transcaucasia
ԱրմենիաՀայերենArmenianАҧсныАҧсышәалаAbkhazХуссар ИрыстонИронауОssetianსაქართველოქართულიGeorgianAzərbaycanАzərbaycancaAzerbaijani
Middle East
Sputnik عربيArabicArabicTürkiyeTürkçeTurkishSputnik ایرانPersianPersianSputnik افغانستانDariDari
Central Asia
ҚазақстанҚазақ тіліKazakhКыргызстанКыргызчаKyrgyzOʻzbekistonЎзбекчаUzbekТоҷикистонТоҷикӣTajik
East & Southeast Asia
Việt NamTiếng ViệtVietnamese日本日本語Japanese俄罗斯卫星通讯社中文（简体）Chinese (simplified)俄罗斯卫星通讯社中文（繁体）Chinese (traditional)
South America
BrasilPortuguêsPortuguese
NewsfeedBreaking
21:07 GMT'Difficult Decision': Facebook Chief Technology Officer to Step Down From Post
20:52 GMTGrandmothers Know Best: Cristiano Ronaldo’s Mother Believes Her Grandson is a Star in the Making
20:02 GMTStates to Provide Cash for Each COVID Death: Modi Gov't to Top Court
19:53 GMTLeaks Reveal UK Equalities Minister Dismissed Colonialism, Mocked Trans People
19:17 GMT'Mars' Fate Was Decided From Beginning': Study Reveals What Likely Happened to Red Planet’ Water
19:11 GMTNo Political Dialogue in NATO, France's Defence Minister Says Amid Submarine Contract Snub
19:08 GMTBarcelona Boss Ronald Koeman Storms Out of Presser Without Taking Questions
19:05 GMTER Doc Accuses Gov’t of ‘Shoving’ Vax Side Effects ‘Under the Mat’ in Vid Leaked to Project Veritas
18:46 GMTEuropean Commission Yet Undecided on AUKUS Deal Response
18:35 GMTFellow ‘Van Life’ Camper Helps Authorities Locate Gabby Petito’s Body
18:33 GMTWhite House: Biden Hopeful Call With Macron Step to Return US-French Relations to Normal
18:25 GMTFive Held in India’s Karnataka for Asking Dalit Family to Pay Fine After Entering Temple
18:14 GMTFormer Treasury Secretaries Urge That US Debt Limit be Raised 'Without Delay'
18:07 GMTNo Genies in Sight: 'Well of Hell' Sinkhole of Yemen Explored by Cavers
17:42 GMTSaudi King Tells UN General Assembly Yemen's Houthis Reject Peaceful Solution to Conflict
17:35 GMTMessi Was 'Tyrant' to Barcelona Teammates in Training, Claims Manager Ronald Koeman
17:27 GMTInt'l Support Group for Lebanon Urges Government to Take Active Measures to Ease Crisis
17:07 GMTIndia: Anti-Terrorist Squad Arrests Islamic Cleric Over Religious Conversion Charge
17:01 GMT'Would Fire it Onto Ceiling': Prince Philip's Mustard Jokes Landed Him in Trouble With Queen
16:59 GMTREC Group Support for Kamaz Export Projects to Exceed 20 Billion Rubles