Wind of Change Needed: Most Europeans Unhappy With EU Policy Toward Russia 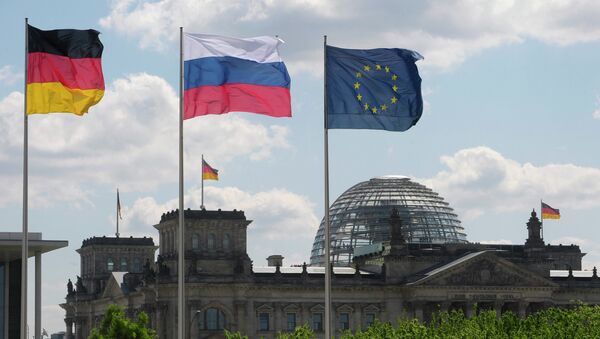 © Sputnik / Sergey Guneev
/
Go to the photo bank
Subscribe
The majority of Europeans are unhappy with the European Union's policy toward Russia, a Pew Research Center poll has revealed.

MOSCOW (Sputnik) — The polled states are Germany, the United Kingdom, Italy, Spain, Poland, the Netherlands, Hungary, Greece, France and Sweden. They account for 82 percent of the EU total GDP, ans make up some 80 percent of the EU population.

"Majorities or pluralities in all the EU member states surveyed disapprove of the job being done by the institution in dealing with Russia. The strongest criticism comes from Greece (69%), Sweden (55%), France (53%), Italy and Hungary (both 52%)," the poll published on Monday said.

As for the further relations with Russia, almost 90 percent of the Greeks stand for "a strong economic relationship" with Moscow. Hungarians, Germans and Italians share the Greeks' sentiment.

Elites vs the People: Ordinary Europeans' Attitudes to Russia are Changing
According to the poll, the Europeans are also unhappy with the bloc’s handling of economic problems. Almost 92 percent of the Greeks disapprove of the EU approach to the issue, while 68 percent of Italians, 66 percent of the French and 65 of the Spaniards would rather agree with them.

In late May, the G7 states — Canada, France, Germany, Italy, Japan, the United Kingdom and the United States — decided to extend sanctions against Russia in June.