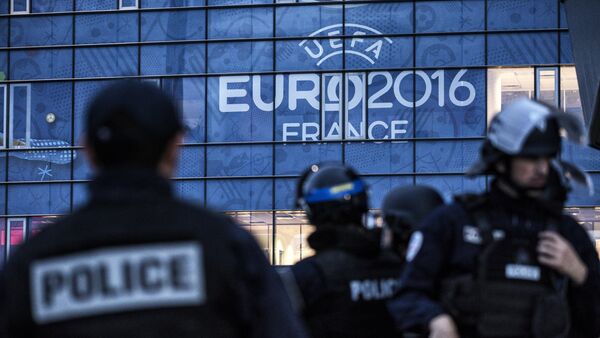 © AFP 2023 / JEFF PACHOUD
Subscribe
International
India
Africa
The French authorities on Monday detained a suspect, linked to a man arrested in Ukraine over alleged plans to carry out a string of attacks during the Euro-2016 football tournament in France.

Ukraine Security Service Prevents 15 Attacks Before Euro-2016 in France
MOSCOW (Sputnik) — Earlier in June, Ukrainian authorities said that they had detained a French citizen on Ukraine's border with Poland. The suspect was carrying Kalashnikov assault rifles, grenade launchers, explosives and detonators in his car. He was charged with smuggling, illegal handling of weapons and terrorism. The Ukrainian officials said the suspect was planning 15 terror attacks across France during the tournament.

According to Le Parisien newspaper, his alleged affiliate, 40-year-old Eric G., was detained at his home in Stainville commune of France’s northeastern Meuse department.

London Warns Fans Traveling to France for Euro-2016 of Potential Attacks
A source close to the investigation carried out by the French police reportedly said that the two suspects met in July 2014 while working together at the Polish-Ukrainian border, and shared extreme right views.

French authorities have so far refused to support the Ukrainian security service's allegation that the suspect detained on border with Poland was planning terror attacks, suggesting instead that he is a member of an arms smuggling network.

The country is in a state of emergency after 130 people were killed in November in a series of terror attacks in Paris.