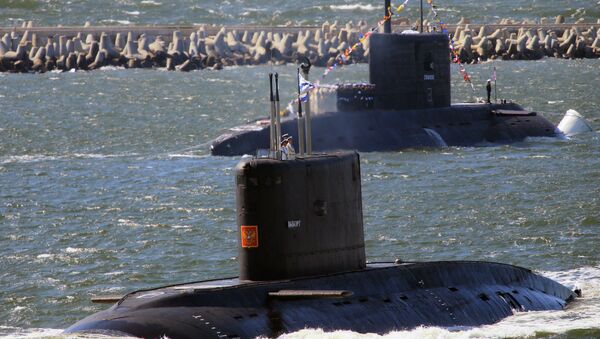 © Sputnik / Igor Zarembo
/
Go to the mediabank
Subscribe
International
India
Africa
Commenting on the recent remarks of US Vice Adm. James Foggo III that an “effective, skilled, and technologically advanced Russian submarine force is challenging” the US in the Atlantic, German newspaper Die Welt provided its reasons for the US concerns.

US Admiral Warns of Phantom Russian Sub Patrols in Atlantic
“Russia is rapidly closing the technological gap with the United States. It has created an advanced military designed to overcome our advantages and exploit our weaknesses — this is the epitome of asymmetric warfare,” US Vice Adm. James Foggo III wrote in his recent article for the US Naval Institute.

“Russia rapidly is building and deploying more advanced and significantly quieter attack submarines and frigates armed with the long-range Kalibr cruise missile (including six new Kilo-class diesel-electric attack submarines destined for the Black Sea). Not coincidentally, these are the platforms that are the most challenging for us to deal with because of their inherent stealth.”

“The clear advantage that we enjoyed in antisubmarine warfare during the Cold War is waning. Russian submarines are more capable than before, and so we are again in a technological arms race with Russia,” he adds.

German newspaper Die Welt provided its reasons why the US is so vividly concerned.

Submarines can decide nuclear wars, Daniel-Dylan Böhmer says in his recent article for the newspaper.

Russian Small Submarine Piranha-T to Be Presented at KADEX-2016
Submarines, armed with nuclear missiles, can deliver a responsive nuclear attack far from its domestic territory, if its home country was hit with a nuclear weapon.

The presence of the mobile weapons of mass destruction deep under sea and far from home guarantees that in a potential nuclear war the first to hit will be also destroyed.

Thus nuclear submarines must be regarded as one of the most important players on a global strategic chessboard.

However there is another very important weapon in this game, which at first glance seems insignificant, which is submarine detection.

The first side to detect a submarine will be able to destroy it, preventing a responsive attack.

Thus, cooperation between a submarine and aviation is very important because a reconnaissance aircraft is able to detect an enemy submarine.

Russia has all the newest aircraft.

And among nuclear powers, there is no more valuable knowledge than the submarine movements of the enemy, the author finally states.