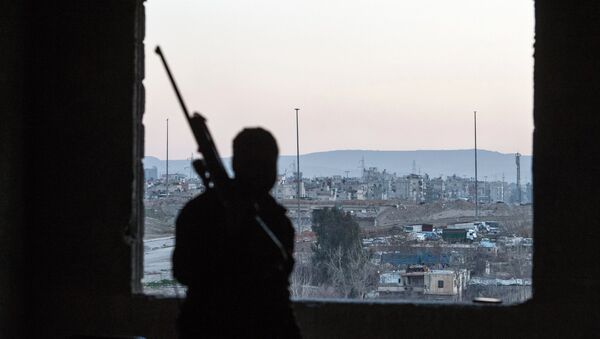 © Sputnik / Iliya Pitalev
/
Go to the photo bank
Subscribe
In a slight turn of events, Washington asked Moscow to direct its airstrikes solely at al-Nusra Front and refrain from targeting so-called "moderate" rebels, working with al-Qaeda's branch in Syria, but, Russian officials and experts have said it is not rational since these militants are coordinating attacks against government forces and civilians.

In other words, those who work with al-Nusra Front even if they do so from time to time are de facto not moderate – whether they are described as such or not.

"The Obama Administration thus continues with the fiction that there are completely separate, vetted, moderate rebels who are dedicated to creating an inclusive, multi-cultural, multi-confessional, secular and democratic Syria as soon as both [Daesh] and the Assad government are defeated," political analyst Daniel McAdams, Executive Director of the Ron Paul Institute for Peace and Prosperity, noted ironically.

On Friday, Russian Foreign Minister Sergei Lavrov urged the US to convince those rebel groups which they support in Syria to leave areas where al-Nusra Front militants are present. The Americans "are telling us not to hit [al-Nusra Front], because there is 'normal' opposition next to it," the diplomat said. "But that opposition must leave terrorists' positions, we long have agreed on that."

In fact, this agreement was reached months ago, but it has not been implemented yet, making counterterrorism efforts in Syria less efficient.

#Lavrov: The territorial contiguity of the opposition and Jabhat al-Nusra affects the effectiveness of counter-terrorist operations in Syria

​Interestingly, both Moscow and Washington view al-Nusra Front as a terrorist organization. In this context, distancing itself from al-Qaeda's offshoot should have been a non-issue for what Russian officials often have referred to as "patriotic" opposition. Why are they not severing ties will al-Qaeda then?

'Still Much to Be Done to Support Syrian Army' - Russian Defense Ministry
Some have tried to defend these groups by saying that they have been forced to stay with al-Nusra Front.

"To be sure, it has been clear for years that the US-allied anti-Assad rebels in Syria lean on al-Qaeda's military prowess for their survival. Some US officials stress that Nusra and opposition forces currently are working together on occasion and that such cooperation is not born out of shared ideology but practical wartime necessity," the Daily Beast asserted.

But what wartime necessity could justify killing civilians? For instance, in May, al-Nusra Front and Ahrar al-Sham, a group that the US considers to be moderate, killed 19 civilians in a joint attack on the Alawite village of Zara, located in the Hama province.

"They killed elderly people, took children and women as captives," Abdou Khalifa, a villager wounded in the attack, told RT last month. Another villager, Munzer Qasem, referred to the attack as a massacre. "I heard of two or three entire families killed. Abu Naval's family was killed. He was an old man and was killed together with his daughters. They were slaughtered in their own house."

US Leaves Russia's Proposals on Security Cooperation Unanswered - Official
Meanwhile, al-Nusra Front have managed to regroup and resupply, taking advantage of the nationwide ceasefire and "moderate" rebels in their midst, the Russian Ministry of Defense reported on Saturday.

In the last few days they have launched attacks on Aleppo, Syria's second largest city, as well as Ard al-Wata, Rasha and Kinsibba in the ‪‎Latakia‬ province, Tesnin in the Homs province, Marj al-Sultan in the Damascus province and the northern region of al-Manshiya neighborhood in the ‪‎Daraa‬ province.

The latest assaults claimed the lives of more than 270 civilians.

"Why is no one asking why … moderates would want to associate themselves with al-Qaeda in the first place? Why do they seek to integrate into al-Qaeda command structures? How are they not to be considered ducks when they walk like ducks and quack like ducks?" Daniel McAdams asked.

000000
Popular comments
The US and it's cronies support terrorists in Syria for their geopolitical reasons, just like they supported the terrorists in Ukraine.

Alektrion
5 June 2016, 10:53 GMT3
000000
They are moderate in so far as they are supported by the US and thereby give the US a say in the negotiating table. They are not moderate in that they are working hand in hand with Al Nusra. It´s a win win situation for the terrorists and the only US interest that it serves is that of the neocons who want Assad out at any cost.
deshepherdishere
5 June 2016, 10:55 GMT
000000
Newsfeed
0
New firstOld first
loader
LIVE
Заголовок открываемого материала
Access to the chat has been blocked for violating the rules . You will be able to participate again through:∞. If you do not agree with the blocking, please use the feedback form
The discussion is closed. You can participate in the discussion within 24 hours after the publication of the article.
To participate in the discussion
log in or register
loader
Chats
Заголовок открываемого материала
Worldwide
InternationalEnglishEnglishMundoEspañolSpanish
Europe
DeutschlandDeutschGermanFranceFrançaisFrenchΕλλάδαΕλληνικάGreekItaliaItalianoItalianČeská republikaČeštinaCzechPolskaPolskiPolishСрбиjаСрпскиSerbianLatvijaLatviešuLatvianLietuvaLietuviųLithuanianMoldovaMoldoveneascăMoldavianБеларусьБеларускiBelarusian
Transcaucasia
ԱրմենիաՀայերենArmenianАҧсныАҧсышәалаAbkhazХуссар ИрыстонИронауОssetianსაქართველოქართულიGeorgianAzərbaycanАzərbaycancaAzerbaijani
Middle East
Sputnik عربيArabicArabicTürkiyeTürkçeTurkishSputnik ایرانPersianPersianSputnik افغانستانDariDari
Central Asia
ҚазақстанҚазақ тіліKazakhКыргызстанКыргызчаKyrgyzOʻzbekistonЎзбекчаUzbekТоҷикистонТоҷикӣTajik
East & Southeast Asia
Việt NamTiếng ViệtVietnamese日本日本語Japanese中国中文Chinese
South America
BrasilPortuguêsPortuguese
NewsfeedBreaking
21:51 GMTUS Intelligence Unit Seeks Way to Detect Radio Signals That Indicate Data Breaches
21:48 GMTUS Senate Confirms Ex-Republican Senator to Be Next Ambassador to Turkey
21:20 GMTUnited Airlines Pilots, Workers Refusing to Fly With Unvaccinated Colleagues, Court Docs Reveal
21:17 GMTEx-Lehman Brothers Exec Predicts 3 More Years of Inflation, Tech Stocks to 'Get Crushed'
21:16 GMTBacking for Increased US Police Budgets Surges to 47% Amid Rise in Violent Crime – Poll
21:14 GMTAt Least 6 Killed, 10 Injured in Attack by IS Militants in Eastern Iraq - Source
20:44 GMTSection of Biden's Infrastructure Bill for Fighting Climate Change Reportedly Tops $500 Billion
20:44 GMTManchester United Hierarchy Reportedly Split on Ole Gunnar Solskjaer’s Future
20:10 GMTTexas Becomes Latest US State to Pass Anti-LGBTQ Law, Banning Trans Girls From Female Sports
19:53 GMTLe Pen Says Hungary's Orban Backs Launch of Hard-Right Alliance in Coming Months
19:51 GMTInvestors George Soros, Reid Hoffman Help Launch Group to Combat Online Disinformation
19:23 GMTChicago City Council Prepared to Vote on $31 Million Program to Assist Low-Income Households
19:16 GMTMedia Reveals Photos of Alleged Arrested Mossad Agents in Turkey
19:02 GMTCould Russia's Zeus TEM Be a Gamechanger for India's Space Ambitions?
18:57 GMTScientists Spot Signs of First Planet Outside Milky Way
18:57 GMTOusted Sudanese Prime Minister Hamdok Reportedly Returns Home
18:51 GMTReporters Without Borders Demands Closing Assange Extradition Case Ahead of New Hearing
18:50 GMTAfter Fiasco in US, Amazon Reportedly Signs Contract for Cloud Service With UK Intelligence Agencies
17:50 GMTOver 17.2 Million Cybersafety Threats Blocked in India, Report Says
17:25 GMTAfghan Soil Will Not Be Used Against China, Assures Taliban Leader After Meeting With Wang Yi