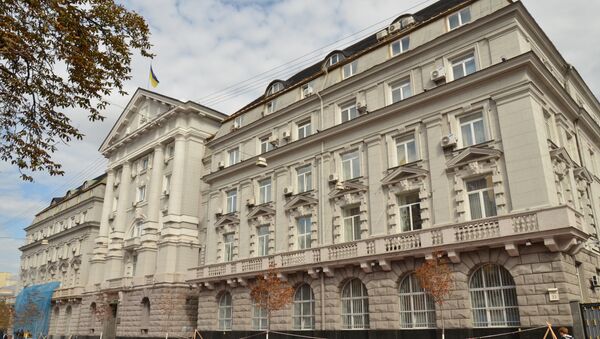 CC BY-SA 3.0 / Kiyanka /
Subscribe
Jiri Mastalka, a Czech member of the European Parliament said that an observer group in charge of investigating the illegal detentions and torture of the detainees by Ukraine’s Security Service (SBU) should be formed.

Ukrainian Security Service Denies UN Claims on Torture in Donbass
MOSCOW (Sputnik) — A specially dedicated observer group should be formed to investigate into illegal detentions and torture of the detainees by Ukraine’s Security Service (SBU), a Czech member of the European Parliament told Sputnik Friday.

Earlier in the day, UN Assistant Secretary-General for Human Rights Ivan Simonovic said that SBU is responsible for hundreds of illegal detentions and tortures, adding that Kiev’s "disregard for human rights" has become systemic and needs to be urgently addressed.

“I am afraid the situation might be even worse than he is describing it,” Jiri Mastalka said. “The way out is to create an observer group in charge of investigating the situation because there are rules of how to treat the detainees. We have Geneva conventions, and I think the Ukrainian authorities must be interested in such observer group that will prove or rule out the tortures,” he added.

SBU has been detaining and torturing suspected opponents of the Kiev regime, those who sympathize with the self-proclaimed people’s republics of Donetsk and Lugansk (DPR and LPR) in Ukraine’s southeast.

Ukraine’s Security Service Tortures Hundreds of Detainees - UN
A delegation of the UN Subcommittee on Prevention of Torture (SPT) visited Ukraine in May to inspect the country’s detention sites.

“As a former military, I don’t rule out that torture is taking place to get the information,” Mastalka said.

Kiev launched a special military operation in Ukraine’s southeast in April 2014, after local residents refused to recognize the new Ukrainian authorities, which came to power as a result of a coup. After independence referendums held in May 2014, the self-proclaimed DPR and LPR were established.

In February 2015, a peace agreement was signed between Ukraine’s conflicting sides in the Belarusian capital, Minsk, however sporadic shelling has continued in Ukraine despite the deal.