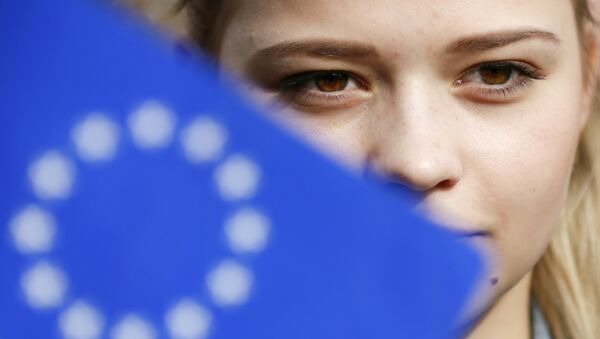 Ukraine and the Netherlands are close to ratify EU-Ukraine Association Agreement, Ukrainian president Petro Poroshenko said at a press conference on Friday.

Dissociative Disorder: Netherlands Could Torpedo Ukraine-EU Agreement
MOSCOW (Sputnik) — Ukraine and the Netherlands are close to the solution which will allow for the Dutch ratification of the Association Agreement between Ukraine and the European Union, Ukrainian president Petro Poroshenko said at a press conference on Friday.

The Ukrainian Association Agreement with the EU was signed in June 2014 and ratified by the parliaments of all 28 EU member states. The Netherlands decided to hold a referendum on the agreement in April 2016, the results of which were negative, although they were advisory in nature and not binding. The following week, the Dutch parliament rejected a proposal by the opposition to withdraw the ratification, providing the government with more time to consider the issue.

"Regarding ratifying, we have the full support of the Netherlands. Once again, I want to note that the results of the referendum are advisory in nature. The Dutch prime minister and I have thoroughly discussed this situation, and I am convinced that we are very close to the model or an algorithm which will allow us to finish the ratification of the Association Agreement," Poroshenko said.

The Ukraine–EU Association Agreement establishes a political and economic association between the parties, as well as regulations across a broad range of areas, including a visa-free regime, the exchange of information by security services, and the modernization of Ukraine's infrastructure.