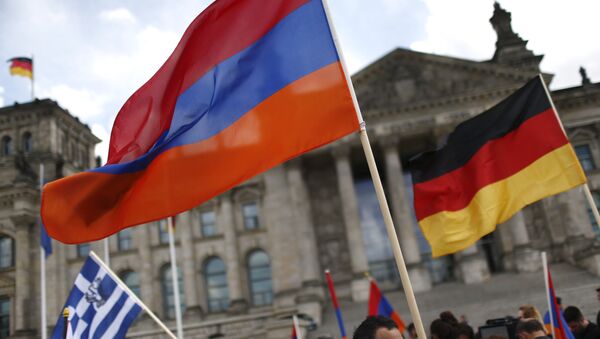 © REUTERS / Hannibal Hanschke
Subscribe
International
India
Africa
The German parliament's vote recognizing the genocide of the Armenians by the Ottoman Empire is a completely "politicized step," which would make a noticeable decline in the German-Turkish relations, a Turkish lawmaker from the ruling Justice and Development (AKP) party told Sputnik on Thursday.

Ankara Recalls Ambassador to Germany After Recognition of Armenian Genocide
MOSCOW (Sputnik) — Earlier in the day, Germany joined the ranks of European countries recognizing the 1915-1916 mass killings of Armenians by the Ottoman Empire as genocide. Before the vote, proposed by lawmakers from the ruling coalition of Conservatives and Socialists together with the Green Party, Ankara said its relations with Germany would deteriorate in case the resolution was passed.

"The decision of the German parliament is an entirely politicized step, which is a serious blow to the Turkish-German friendship and cooperation. The decision of the Bundestag does not consider the presence of more than 3 million Turks in Germany and the efforts made by these people for Germany's stability and prosperity," Mustafa Yeneroglu said.

He added that the vote also cast a shadow over Turkey's attempts to normalize its relations with Armenia in recent years.

Dozens Celebrate Bundestag’s Decision to Recognize Armenian Genocide
The lawmaker also expressed hope that the Turkish-German relations would survive such "a serious test for resistance."

Following Germany's recognition of the genocide, Turkey reacted by recalling its ambassador to Germany for consultations.