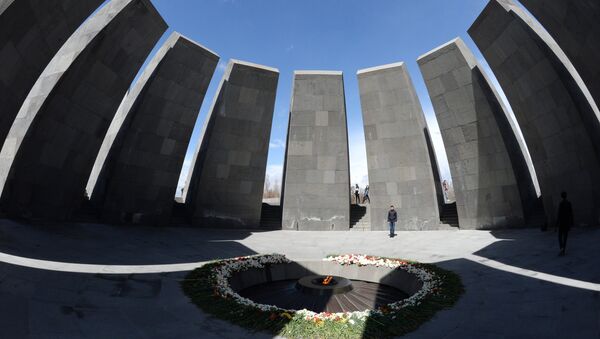 © Sputnik / Vladimir Fedorenko
/
Go to the photo bank
Subscribe
Ambassador of Finland to the Republic of Armenia Christer Michelsson said that historians from Armenia and Turkey should together study the 1915-1916 massacre of Armenians by the Ottoman Empire and come to a common view.

Yerevan to Push for Further Recognition of Genocide by Ottoman Empire
MOSCOW (Sputnik) — Yerevan and Ankara should study the events of 1915 when 1.2 million Armenians were killed by the Ottoman Empire together and reach a common view on what happened, Ambassador of Finland to the Republic of Armenia Christer Michelsson told Sputnik on Thursday.

Earlier in the day, the German parliament voted to pass a resolution recognizing the 1915-1916 massacre of Armenians by the Ottoman Empire as "genocide."

"It would be very good if this question is analyzed by historians from both countries – Armenia and Turkey, and they would together study these difficult days in the history of their countries, and we think it would be good, desirable if Armenia and Turkey come to a common view on the 1915," Michelsson said.

Germany Recognizes Need to Keep Memory of Armenia Genocide Alive
Armenian genocide has been recognized by different countries, including by Sweden, Belgium, Italy and France. Michelsson stressed that Finland’s position was that the government did not judge historical facts or historical occasions.

"The Finnish government has not taken a stand in any historical question like this," Michelsson said.

The German parliament’s resolution, proposed by lawmakers from the ruling coalition of Conservatives and Socialists together with the Green party, was voted through the Bundestag after an hour-long debate, with one lawmaker opposing the resolution and two abstaining.

000000
Popular comments
are there any historians left in turkey or have they all been placed in prison / fled the country?
michael
3 June 2016, 02:59 GMT
000000
Newsfeed
0
New firstOld first
loader
LIVE
Заголовок открываемого материала
Access to the chat has been blocked for violating the rules . You will be able to participate again through:∞. If you do not agree with the blocking, please use the feedback form
The discussion is closed. You can participate in the discussion within 24 hours after the publication of the article.
To participate in the discussion
log in or register
loader
Chats
Заголовок открываемого материала
Worldwide
InternationalEnglishEnglishMundoEspañolSpanish
Europe
DeutschlandDeutschGermanFranceFrançaisFrenchΕλλάδαΕλληνικάGreekItaliaItalianoItalianČeská republikaČeštinaCzechPolskaPolskiPolishСрбиjаСрпскиSerbianLatvijaLatviešuLatvianLietuvaLietuviųLithuanianMoldovaMoldoveneascăMoldavianБеларусьБеларускiBelarusian
Transcaucasia
ԱրմենիաՀայերենArmenianАҧсныАҧсышәалаAbkhazХуссар ИрыстонИронауОssetianსაქართველოქართულიGeorgianAzərbaycanАzərbaycancaAzerbaijani
Middle East
Sputnik عربيArabicArabicTürkiyeTürkçeTurkishSputnik ایرانPersianPersianSputnik افغانستانDariDari
Central Asia
ҚазақстанҚазақ тіліKazakhКыргызстанКыргызчаKyrgyzOʻzbekistonЎзбекчаUzbekТоҷикистонТоҷикӣTajik
East & Southeast Asia
Việt NamTiếng ViệtVietnamese日本日本語Japanese俄罗斯卫星通讯社中文（简体）Chinese (simplified)俄罗斯卫星通讯社中文（繁体）Chinese (traditional)
South America
BrasilPortuguêsPortuguese
NewsfeedBreaking
04:30 GMTA Sigh That Tells It All: Golden Retriever Wants Attention
04:28 GMTLive Updates: Germany Registers 10,454 New COVID-19 Cases
04:11 GMTFlorida Gov. Orders All State Agencies to Search for Laundrie After Petito's Remains Confirmed
03:43 GMT'Nothing New on That': Bill Gates Brushes Off Question About His ‘Dinners’ With Epstein
03:33 GMTGOP Politicians Stand by US Border Patrol After Claims They 'Whipped' Refugees at Rio Grande River
03:14 GMTPele Cheers Up Fans by Posting Video of Him Riding Exercycle in Hospital
03:07 GMTAxis of Resistance Killed US, Israeli Commanders in Revenge for Soleimani's Assassination - Report
02:56 GMTPolitical Capital & GOP in His ’Grip’: Trump ’Wants Back’ in 2024, Journos Say
01:43 GMTIRGC Chief: Iran No Longer Sees US as Threat - Report
01:18 GMTChinese Covid Vaccines Reach 100 Nations, But WHO Warns Africa Still Short 470 Million Shots in 2021
01:04 GMTAwkward Moment as White House Staff Cuts Off Biden-Johnson Meeting in Mid-Sentence
00:20 GMTVideo: Military Jet Intercepts Small Aircraft Over NYC in the Middle of UN General Assembly
00:19 GMTPark Ranger ‘Implored’ Gabby Petito to Distance Herself From Toxic Relationship With Brian Laundrie
YesterdayVideos: 6.0 Earthquake Strikes Southeastern Australia
YesterdayPro-Reunification Candidate Chang Ya-chung Edges Ahead as Chairman Election in Taiwan’s KMT Nears
YesterdayTexas Governor Vows to Prevent Del Rio Migrant Surge Disaster From Being Replicated
YesterdayUber’s Business Model Faces Threat After Legal Setback Across Europe
YesterdayUS Lawsuit Challenges Alliance of 2 Airlines for Stifling Competition
YesterdayTaliban Say No Al-Qaeda Members Present in Afghanistan
YesterdayJoe Biden Faces Backlash Over Inept UN Speech