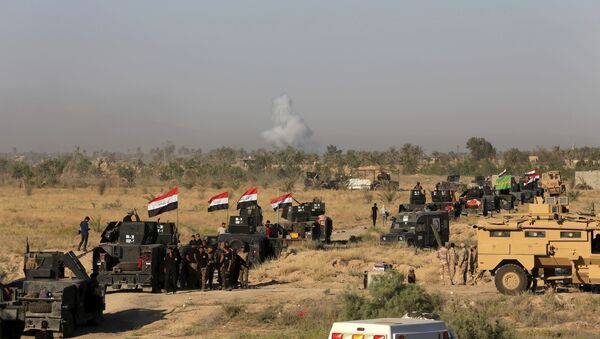 ERBIL (Sputnik) — Shiite militia, fighting Daesh in the Iraqi city of Fallujah, has discovered network of the tunnels used by extremists in the suburbs of the city, the al-Hashd al-Shaabi group told RIA Novosti on Monday.

"Tunnels begin out of city [of Fallujah] and go in the direction of the city center. Terrorists used it to move quickly between their positions," the group said.

Extensive tunnel and cave systems built by Da'ish around #Fallujah. Many discovered by #Iraq's forces so far. pic.twitter.com/i1w7K3Ijfa

​According to the Shiite militia, one of the branched was found near the brickyard used by terrorists as a stronghold.

Da'ish use tunnels/caves to avoid airstrikes + to escape after attacks on #Iraq's forces. This one near Mt. Makhoul: pic.twitter.com/nD4ebf346p

​Since 2014, Iraqi city of Fallujah has been controlled by the Islamic State, a terror group, outlawed in Russia. Before the war, the city was one of the country's biggest with population of 350,000 people.