French Senators Call to Get Rid of Anti-Russian Sanctions 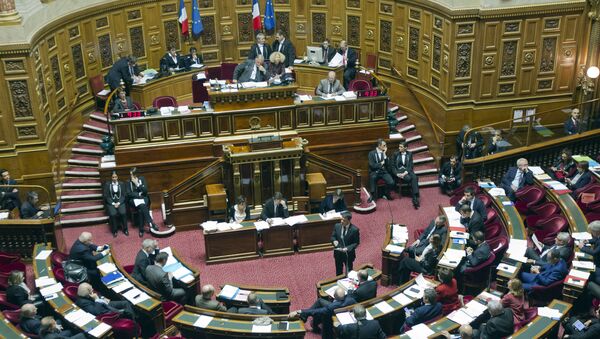 © AP Photo / Jacques Brinon
Subscribe
While the G7 leaders re-affirmed their commitment to anti-Russian sanctions in Japan, French lawmakers made another move to thwart them on May 27, when the French Senate’s Committee for European Affairs voted for a resolution calling to reduce the punitive measures imposed against Moscow.

Yves Pozzo di Borgo, the senator who drafted the resolution, told Sputnik that the resolution is in fact a constitutional procedure that was presented at the Senate’s Committee for European Affairs.

"It is a lengthy procedure with multiple stages. The Senate will review the resolution on June 8. I was also pleasantly surprised today when the committee members voted almost unanimously for it (one person voted against it and another one abstained). And what surprised me even more is the fact that Socialist senators who support the government also voted for this resolution together with us. This is, of course, far from over – but it is a very good start,"di Borgo said.

US DoS Sees France Holding Strong on Anti-Russian Sanctions
The senator explained that the resolution calls to reduce sanctions against Russia because its authors believe that the policy of sanctions is no longer viable. Furthermore, the resolution can be amended, as it was meant to be more of a political gesture than an actual resolution. He also added that this motion will likely even reach the European Council during its next session, which is scheduled to take place during late June.

"This is a procedure that carries considerable political weight… and Francois Hollande will have to take this resolution into account. Even though it is a non-binding vote, it is a powerful political gesture nevertheless," di Borgo said.

The fact that the majority of the Committee’s members, Socialists and representatives of the opposition alike, voted for the resolution proves that French public opinion and the country's business sector are tired of the anti-Russian sanctions, di Borgo explained. If the Senate adopts the resolution during the June 8 session, it would serve as a sign that Europe should begin getting rid of the punitive measures that have been imposed against Russia.

"Just like the Minsk agreements, this is going to be a lengthy but important process. And this vote marks a major shift in the attitude of the French parliament and changes in the public opinion, because we represent French society," Senator di Borgo concluded.