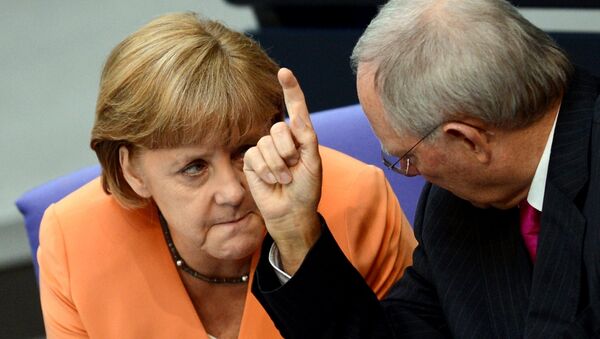 © AFP 2021 / Johannes Eisele
Subscribe
An investigation by the German newspaper Bild has revealed that German Foreign Minister Frank-Walter Steinmeier is the friendliest member of the country's cabinet.

Merkel Derails Steinmeier's Bid for German Presidency
German newspaper Bild has investigated which ministers in the German government are on personal terms with each other, and with German Chancellor Angela Merkel.

In contrast to English, in which speakers use the same pronoun for everyone they speak to, German has two forms of the second-person pronoun "you," which allow the speaker to distinguish between formal (Sie) and more friendly (du) relationships.

According to Bild's investigation, the friendliest member of the cabinet is Minister for Foreign Affairs Frank-Walter Steinmeier, who is on "du" terms with ten other cabinet colleagues.

However, Steinmeier, like other members of the SPD party, which has been in a coalition with Merkel's Christian Democratic Union and its Bavarian Christian Social Union sister party since 2013, is not on friendly terms with the Chancellor.

Angela Merkel is "duzen," meaning "uses the du form," with just five members of the cabinet, all of whom are from her own party.

The most formal, yet consistent, member of the cabinet is Finance Minister Wolfgang Schauble, also from Merkel's CDU party. Bild reports that Schauble respectfully calls everybody "Sie," no matter what.