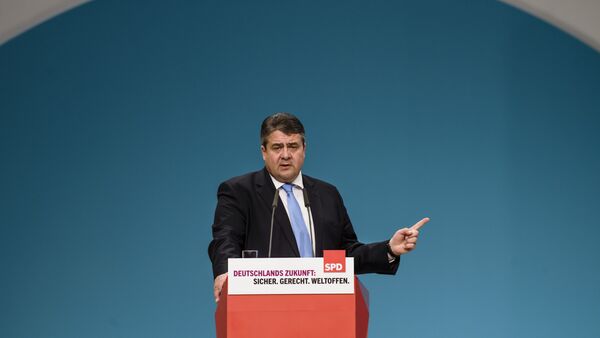 German Economy Minister Sigmar Gabriel held a meeting on Wednesday with Russian Industry and Trade Minister Denis Manturov in German Rostock and called for further dialogue with Moscow over removal of the anti-Russian sanctions.

MOSCOW (Sputnik) — On Wednesday, Rostock, the largest German port city and transport hub on the Baltic Sea coast, hosted the Russia Day attended by officials and businessmen from Russia and Germany.

"We all know from our experience that permanent isolation brings nothing. After all only dialogue can help," Gabriel said as quoted by the Ostsee-Zeitung newspaper.

Relations between Russia and the European Union, including Germany, as its member state, deteriorated amid the 2014 crisis in Ukraine. Brussels, Washington and their allies have introduced several rounds of anti-Russia sanctions since the reunification of Crimea with Russia in 2014, accusing Moscow of meddling in the Ukrainian conflict.