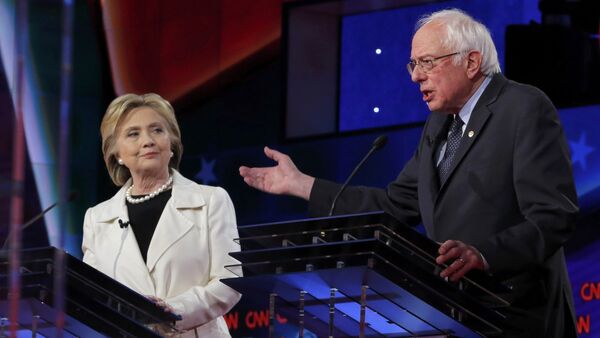 © REUTERS / Lucas Jackson
Subscribe
International
India
Africa
At a rally in Santa Monica Monday night, Bernie Sanders said he “was disturbed, but not surprised” that his chief rival for the Democratic Party presidential nomination, Hillary Clinton, has declined to debate him prior to the June 7 California primary election.

"I think it’s a little bit insulting to the people of California — our largest state — that she is not prepared to have a discussion with me about how she will help the Californians address the major crises that we face," he said.

Jennifer Palmieri, communications director for the Clinton campaign, said in a statement on Monday, "We believe that Hillary Clinton’s time is best spent campaigning and meeting directly with voters across California and preparing for a general election campaign that will ensure the White House remains in Democratic hands."

California, with its 475 Democratic delegates is a crucial election for the candidates, with Sanders needing roughly 850 delegates, and Clinton 90.

Clinton said in an interview recently that Sander’s low delegate numbers is an issue for the Vermont Senator that is "insurmountable," stating, "I will be the nominee for my party…That is already done in effect. There is no way I won't be."

Michael Briggs, a spokesman for the Sanders campaign, responded saying "In the past three weeks voters in Indiana, West Virginia and Oregon respectfully disagreed with Secretary Clinton," and that, "We expect voters in the remaining eight contests also will disagree."

He added, "With almost every national and state poll showing Sen. Sanders doing much, much better than Secretary Clinton against Donald Trump, it is clear that millions of Americans have growing doubts about the Clinton campaign."

This is the second debate refused by Clinton, after she declined to participate in a debate with Sanders on Fox News.

Bill Sammon, Fox News VP,  said in response, "Naturally, Fox News is disappointed that Secretary Clinton has declined our debate invitation, especially given that the race is still contested and she had previously agreed to a final debate before the California primary."

Palmieri stated, "We have declined Fox News’ invitation to participate in a debate in California," Palmieri said. "As we have said previously, we plan to compete hard in the remaining primary states, particularly California, while turning our attention to the threat a Donald Trump presidency poses."

"A lot of Republicans themselves say Donald Trump is a disaster waiting to happen to America," said Clinton at a recent convention for the Service Employees International Union, telling the influential labor organization that         "[Trump] could bankrupt America like he’s bankrupted his companies. I mean, ask yourself: How can anybody lose money running a casino? Really."

Sanders feels that Clinton’s attitude toward the debate is as much a slight to California voters as it is to his campaign.

"The state of California and the United States face some enormous crises.” Sanders said, “Democracy, and respect for the voters of California, would suggest that there should be a vigorous debate in which the voters may determine whose ideas they support. I hope Secretary Clinton reconsiders her unfortunate decision to back away from her commitment to debate."