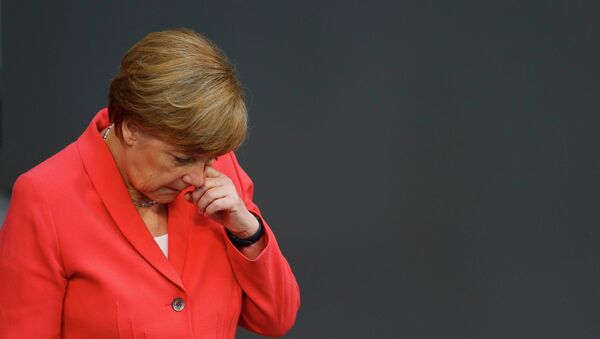 © REUTERS / Axel Schmidt
Subscribe
International
India
Africa
German Chancellor Angela Merkel is not interested in listening to those who advocate democracy and human rights in Turkey, chief editor of the Turkish opposition newspaper Cumhuriyet, Can Dundar, said in an interview with German newspaper Bild.

“Merkel ignores those in Turkey who share European values and principles. Instead, Erdogan is exporting his Turkish principles to Europe and sending journalists to court, now German journalists too. It would be funny if it weren’t so sad,” Dundar said.

He added that half of the population in Turkey disagreed with Erdogan, but the German leader just didn’t listen to those who advocate freedom, human rights, secularism and democracy during her visits to the country.

Dundar added, however that he was fully aware of Angela Merkel’s predicament in view of the current migrant crisis, which the EU is trying to handle with Turkey’s help.

“That’s why she [Angela Merkel] is looking for ways to communicate with him [Recep Tayyip Erdogan]. She has been forced to deal with a despotic leader of a country with which she has no common denominator,” Dundar emphasized.

Can Dundar urged the German Chancellor to meet him to talk about “things her government is missing on, about the deal, about refugees and the state of our media,” he added.

Erdogan Seizing Absolute Power in Turkey With 'Merkel’s Full Acquiescence'
According to a Reuters report, during a visit to Turkey on Sunday Angela Merkel met with journalists, representatives of Human Rights Watch, experts on the problem of Kurdistan, the head of the Turkish bar association and business representatives.

There has been no immediate word about the outcome of Sunday’s meeting.