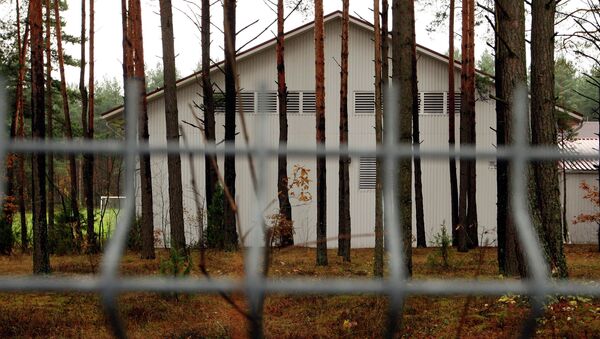 A lawyer for terror suspect Mustafa al-Hawsawi, currently held at Guantanamo Bay, said Monday she has requested “victim status” for him in Lithuania, where he allegedly was tortured by the CIA at a secret jail.

Ex-CIA Officer: US Government Presented Gitmo as ‘Holiday Camp’
The 47-year-old Saudi national was accused of financing the September 11, 2001 terrorist attacks on the United States. He was captured in Pakistan in 2003 by local security forces and was later handed over to US authorities. He faces the death penalty if found guilty.

Human rights groups have suggested that between 2003 and 2006, al-Hawsawi was kept in one of the US secret "black site" jails in allied countries used by CIA to detain and torture terror suspects.

Hawsawi was mentioned in a 2014 US Senate report, indicating that he was at some point illegally detained in Lithuania before being sent to Guantanamo Bay.

"If it's true that the [Lithuanian] site was set up, then it is likely that there were individuals who were victims," lawyer Ingrida Botyriene told AFP.

Botyriene filed the request in a Vilnius court on Friday, claiming Hawsawi was subjected to special interrogation methods considered to be torture by the European Court of Human Rights.

According to prosecution spokeswoman Rita Stundiene, there is no reliable evidence that Hawsawi experienced, "any moral, property or physical damage in the crimes investigated."

Victim status would allow Hawsawi's legal team access to material in the investigation, restarted by Lithuanian prosecutors, regarding allegations that state security officials assisted the CIA in operating a secret jail in the Baltic country.

The probe was reopened following the release of an explosive US Senate report detailing US torture of detainees.

John Kiriakou to Sputnik: 'There Has to Be a Price to Pay' for CIA’s Lies
Human rights investigators claim that in 2005-2006 the CIA ran a secret prison in Lithuania, converted from what was a horseback-riding school near Vilnius. The black site referred to in the Senate report, known as "Violet," was a part of the US's post-9/11 extraordinary rendition program and now belongs to the Lithuanian intelligence agency.

In 2009, a Lithuanian parliamentary enquiry identified two sites used in the country by the CIA as secret jails, but said it was impossible to confirm whether the suspects in question were detained at the facilities.