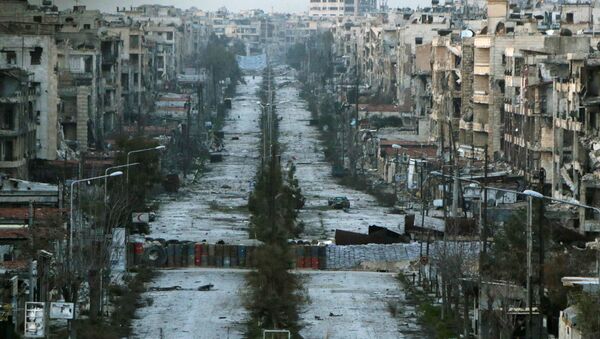 The future of Syria is now being decided not in Damascus or Geneva, but in Aleppo. If the Syrian Army and its allies win the battle for Aleppo it will not only end the war but also ruin plans of Turkish President Recep Tayyip Erdogan, who is reportedly supporting radical groups in Syria, analyst Catherine Shakdam wrote.

Currently, Aleppo is part of the silence regime in Syria, a ceasefire brokered by Russia and the US. However, the situation in the city remains complicated.

Over the past several weeks, the fiercest clashes in Syria have taken place in Aleppo.

"With major military operations already underway in Aleppo and more to come, the province is emerging as the focal point of the war in Syria. Of the ongoing battles in the region, the largest and most decisive is the fight between rebels and loyalists for the divided city of Aleppo," a report by Stratfor think tank read.

Erdogan 'Wants to Take a Part of Syria' – French MP
While the Syrian government tries to strengthen its position with a victory in Aleppo, the rebels are fighting for the "survival of their case."

Different rebel groups have been carrying out their offensives in Aleppo, including the al-Nusra Front, Ahrar al-Sham, and the Free Syrian Army. However, the advances of the Syrian Army and its allies backed by Russian airstrikes have foiled attempts by militants to advance, according to Stratfor.

The Syrian conflict involved a number of different forces, and some of them are not interested in ending the war, Russian political analyst Azhdar Kurtov said in an interview with the newspaper Vzglyad.

Invasion? Syrian Kurds Report Turkish Military Crossed Syrian Border
"Radical groups have strong positions near Aleppo. They are not ready for a compromise with Assad. Many of them also have foreign sponsors like Turkey and Saudi Arabia. Even if Moscow and Washington have the same positions Ankara and Riyadh would continue to support terrorists," he pointed out.

He added that radical groups in Syria would do everything they can to undermine the ceasefire.

Earlier this week, President Erdogan gave further indication that his government is actively considering the deployment of troops in Syria.

Kurds Fear Aleppo Turning Into Al-Qaeda Center
On Friday, the media center of the Patriotic Union of Kurdistan reported that Turkish soldiers accompanied by two tanks entered the territory of Syria near the Turkish city of Nusaybin.

Throughout 2016 there have been growing signs of Ankara’s intention to deploy ground forces in Syria. In February, the Russian government reported "a growing number of signs of hidden preparation by the Turkish armed forces to carry out active operations in Syria."

Obsessed with ambitions to revive the Ottoman Empire, Erdogan is ready to send troops to Syria, in a bid to support terrorist groups, Catherine Shakdam, the Associate Director of the Beirut Center for Middle Eastern Studies, wrote in her article for the New Eastern Outlook.

However, such a reckless move could bring Erdogan’s political career to collapse, the author added. If Turkey invades Syria in an unilateral act of aggression, Syria’s allies – Russia and Iran – will deliver a military response.

What is more, with his ambitions, Erdogan is ready to oppose its NATO allies, including the US.

"Erdogan is sending a signal to NATO and Turkey’s European partners – they should turn a blind eye to his possible aggression in Syria or they will face floods of migrants he pledged to stem in accordance with a migrant deal between Ankara and Brussels," the article read.

Considering the fact than Turkey has been a long-time supporter of terrorism in Syria to pursue its geopolitical ambitions, Erdogan now poses a threat to Europe, the author concluded.