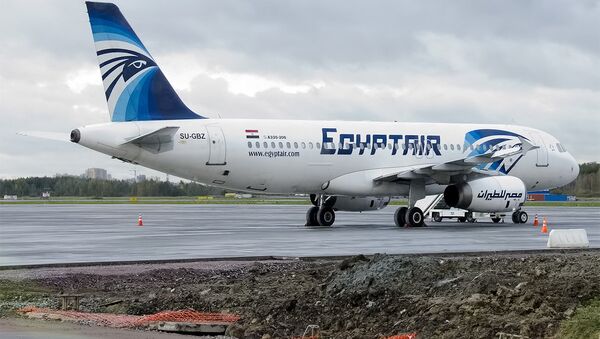 © Flickr / Anna Zvereva
Subscribe
Еhe US-based intelligence analysis company Stratfor said that the fact that no terrorist group has claimed responsibility for the EgyptAir MS804 flight crash could possibly mean the accident has been caused by a technical failure rather than a bomb.

All EgyptAir Crash Versions Still on Table Despite Reports on Smoke Aboard
MOSCOW (Sputnik) — The fact that no terrorist group has claimed responsibility for the EgyptAir MS804 flight crash could possibly mean the accident has been caused by a technical failure rather than a bomb, the US-based intelligence analysis company Stratfor said on Saturday.

"As the investigation into the crash of EgyptAir Flight 804 continues and searchers begin to find evidence, the jihadist world has been strangely silent. The one obvious explanation for this is that a catastrophic mechanical or electrical failure brought down the aircraft rather than a bomb," Stratfor said in an analysis.

According to Stratfor, jihadists have claimed responsibility the same day or within 24 hours for all major terrorist attacks in recent times, including those in Brussels, Paris and Jakarta.

"Judging by the pattern of previous claims, if the Islamic State [outlawed in Russia], al Qaeda or a regional affiliate were behind this attack, we would have expected to see a claim of responsibility by now," the analysis continues.

According to the analysis, the fact that not a single terrorist group has associated itself with the EgyptAir plane crash does not mean the accident was not a terrorist attack.

On Thursday, the EgyptAir Airbus A320 plane, carrying a total of 66 people, disappeared from radar screens over the Mediterranean Sea, 10 miles into Egyptian airspace. The plane was headed from Paris to Cairo.

EgyptAir has said via Twitter that the Egyptian Armed Forces have discovered the wreckage and personal items from flight MS804 183 miles from the coast of Alexandria.

000000
Popular comments
Nobody claimed responsibility for 9/11. Does that mean it was multiple technical failures?

22 May 2016, 03:44 GMT
000000
I'm confused. If the plane was ten miles inside Egyptian airspace then it was at most 2 miles from the Egyptian coast. But the claim is that wreckage has been found 183 miles off the coast. I'm also wondering why Israel has not joined in the search, since if the plane crashed 183 miles from Egypt then it must have crashed inside Israeli airspace. Is that why we are being fed conflicting stories? Is it in the hope that no one will notice that Israel is conspicuous by its absence from the search?

22 May 2016, 03:54 GMT
000000
Newsfeed
0
New firstOld first
loader
LIVE
Заголовок открываемого материала
Access to the chat has been blocked for violating the rules . You will be able to participate again through:∞. If you do not agree with the blocking, please use the feedback form
The discussion is closed. You can participate in the discussion within 24 hours after the publication of the article.
To participate in the discussion
log in or register
loader
Chats
Заголовок открываемого материала
Worldwide
InternationalEnglishEnglishMundoEspañolSpanish
Europe
DeutschlandDeutschGermanFranceFrançaisFrenchΕλλάδαΕλληνικάGreekItaliaItalianoItalianČeská republikaČeštinaCzechPolskaPolskiPolishСрбиjаСрпскиSerbianLatvijaLatviešuLatvianLietuvaLietuviųLithuanianMoldovaMoldoveneascăMoldavianБеларусьБеларускiBelarusian
Transcaucasia
ԱրմենիաՀայերենArmenianАҧсныАҧсышәалаAbkhazХуссар ИрыстонИронауОssetianსაქართველოქართულიGeorgianAzərbaycanАzərbaycancaAzerbaijani
Middle East
Sputnik عربيArabicArabicTürkiyeTürkçeTurkishSputnik ایرانPersianPersianSputnik افغانستانDariDari
Central Asia
ҚазақстанҚазақ тіліKazakhКыргызстанКыргызчаKyrgyzOʻzbekistonЎзбекчаUzbekТоҷикистонТоҷикӣTajik
East & Southeast Asia
Việt NamTiếng ViệtVietnamese日本日本語Japanese中国中文Chinese
South America
BrasilPortuguêsPortuguese
NewsfeedBreaking
01:28 GMTMass Theft Occurs at Best Buy Store in Minnesota, Police Say
00:26 GMTTrump Keeps Mt. Rushmore Sculpture With His Face on It on Display in His Office
00:01 GMTA Glimpse of Hope: Biden Approval Rating Climbs 2 Points, But Still Scores Low on Economy - Poll
YesterdayAbbott Says Texas Is Ready For Possible Cold Winter Due to ‘Dozen Laws’ Signed
YesterdayBarnier Says France Has to 'Be Ruthless With the British' Amid Migrant Crisis - Report
YesterdayEx-Labour Leader Corbyn Slams 'Irrational' Suspension From Party One Year On
YesterdaySudanese Army Repels Attack by Ethiopian Troops With Casualties on Both Sides
YesterdayWHO Says No Need for Panic Over Omicron Coronavirus Strain as Much Remains Unknown
YesterdayBiden's First Christmas Tree Will Reportedly Cost Taxpayers $139,000
YesterdayMemes Flood Twitter After WHO Dubs New Covid Strain Omicron
YesterdayOmicron Coronavirus Strain May Already Be in US, Going to Spread 'All Over', Fauci Says
YesterdayNCT 2021 Walks Into a Dream in New Teaser Video 'Year Dream: Stage 2 - Surfing in Our Dreams'
YesterdayWHO Confirms Some Guesses on Why It Skipped Two Letters and Named New COVID Variant 'Omicron'
YesterdayFrance Mulls Autonomy for Caribbean 'Confetti of Empire' Amid COVID-19 Rule Protests
YesterdaySolomon Islands Gripped by Anti-China Protests as US Keeps Largely Mum
YesterdayRussia is Not Going to Attack Anyone, Ambassador to US Says
YesterdayWhy Washington's 'Russian Invasion' Scare is Cover for Kiev's New Offensive Against Donbass
YesterdayActor Seth Rogen Mocked Online For Downplaying Crime in Los Angeles
YesterdayUK PM Orders Travel Quarantine and Mask-Wearing to Combat COVID-19 Omicron Variant
YesterdayBiden Reminded of Attack on Trump for African Travel Ban He Now Emulates