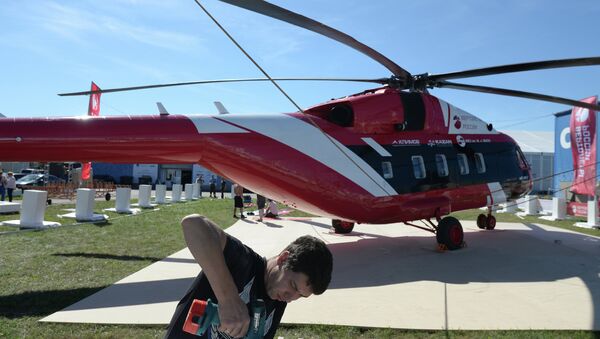 “This is an absolutely new development you won’t find anywhere else in the world. Italy’s AugustaWestland uses a trackball, but no one has ever used a joystick to fly a helicopter before,” Daniil Brenerman, the head of the Ramenskoye Instrument-Making Bureau, told Izvestia newspaper on Friday.

“We hope that joystick controls will become part of each and every future Russian helicopter design,” he added.

What makes the cockpit with four LCD displays and a control panel with a joystick and a trackball so special is that it can be installed on various types of rotorcraft, including the AugustaWestland — the first Western helicopter to be built under license in Russia.

New Russian Mi-38 Helicopter Ready for Market Launch
The joysticks will be installed on the new Mi-38 helicopters. The Defense Ministry has already placed an order for three units with an additional five to be supplied later.

“We have already conducted a series of on-ground trials and are ready for in-flight tests before the end of this year. Mass production for future Russian helicopters will start in 2017,” Brenerman said.

The replacement of the traditional steering wheel with a joystick signifies a switch to so-called “electronic flight” that makes life much easier for the pilot.

“This system is called fly-by-wire and this is where the computer kicks in taking on some of the functions normally performed by the pilot,” aviation expert Anton Lavrov told Izvestia.

“The joystick sends the signal to the on-board computer which analyzes it and then passes it on. This rules out a situation where a pilot mistakenly sends the aircraft into a nosedive or performs any other dangerous maneuver,” Lavrov emphasized.

The Mi-38 is one of the most automated helicopters around ensuring automatic flight, hovering and landing.