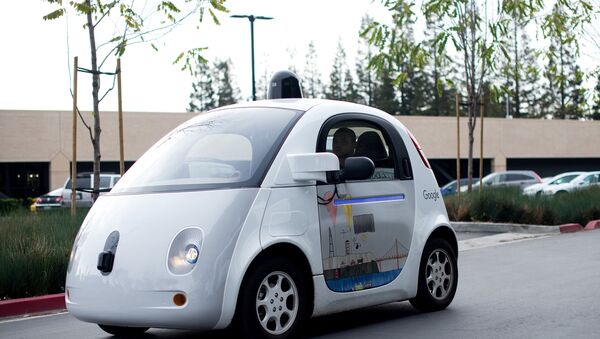 © AFP 2022 / Noah Berger
Subscribe
Google's Self-Driving Car Project took another big leap forward this week, as the company was granted a patent on an adhesive system which activates in the event of a pedestrian collision.

The system acts a bit like flypaper, but is only enacted in the event of a crash, ensuring that a person is not thrown from the vehicle until it comes to a standstill.

A fleet of 57 vehicles have so far clocked up around 1.5 million driverless miles for Google, during which they have suffered a number of crashes, although the vast majority of those were the fault of other — real life human — drivers.

Saw a Google self-driving car. There were humans driving it; will be very strange when there aren't. pic.twitter.com/HQ3QcTjYBP

​Tech giant Google's Self-Driving Car Project has been in the pipeline since 2009, and the company seems confident that a working model could be available for consumers by 2020.

The dream of self-driving cars might seem like a very 21st century thing, but it actually dates back much farther.

Everything we know about the @google self-driving car https://t.co/LOPQGcVcoU pic.twitter.com/NbEHpDrT5U

Visitors to the Futurama Exhibit at the 1939 New York World's Fair were shown a vision of "automated highways," which proposed a system of driverless cars with the main purpose of easing congestion.

These days, the primary motivation behind driverless technology is safety. Google claims that driverless cars could reduce deaths from traffic accidents "dramatically," as well as allowing elderly and visually impaired people to retain their independence.

Google are, of course, not alone in the race to bring driverless cars to our streets.  Apple, Tesla and Volvo are also involved in similar research, and a number of trials are underway in the US and UK.

An initiative is also underway to bring self-driving trucks to the US.