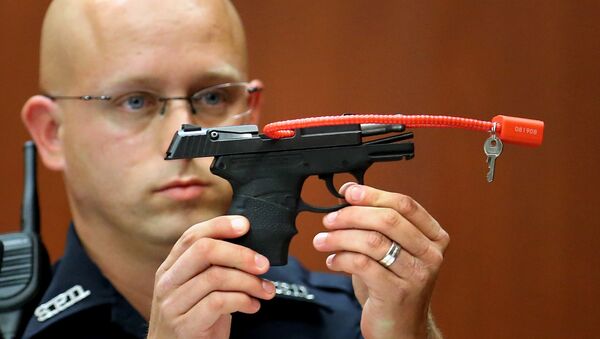 Zimmerman, who was acquitted in the killing of the Florida teen, faced harsh criticism for selling what he labeled "an American firearm icon," and responded in an interview with the Daily Beast by blaming the boy’s death on the victim’s parents and upbringing.

Justice for Trayvon: Four Years On, Has Anything Changed in the US?

"They didn’t raise their son right. He attacked a complete stranger and attempted to kill him," Zimmerman said, "Sybrina Fulton and Tracy Martin did everything they could to capitalize on her son’s death. She was never a mother figure to him. Tracy Martin couldn’t have cared less about their son. He treated him like a dog without a leash."

According to Zimmerman’s post on the auction site, Unitedgungroup.com, some of the proceeds from the sale would go to "fight BLM [Black Lives Matter] violence against Law Enforcement officers, ensure the demise of [Florida state prosecutor] Angela Corey’s persecution career and Hillary Clinton’s anti-firearm rhetoric."

Zimmerman said that if he could, he "Would take that money and I would make sure that every law enforcement officer and every single civilian who is affected by the Black Lives Matter fraudulent, violent campaign—those officers, those civilians, their entire families—were made wealthy beyond their wildest imaginations."

Mrabet suggested that the very public way the gun sale took place is an insult to people who have been killed by vigilantes, police and security guards in recent years.

"With him selling the gun and making it a big spectacle, it’s the system telling everybody ‘this is how things are and there nothing you can do about it,'" she said. "There will be no accountability when these killings happen. We’ve seen it time and again."

Ciara Taylor, political director of activist group the Dream Defenders feels that Zimmerman’s motivation for selling the gun is rooted in a deeper social and societal issue.

"The recent actions of George Zimmerman are prime examples of a mental condition affecting the country at large: a heteropatriarchal, white supremacist societal illness that has been permeating and abstracting the moral conscience of the people of the United States since its foundation,"she said.