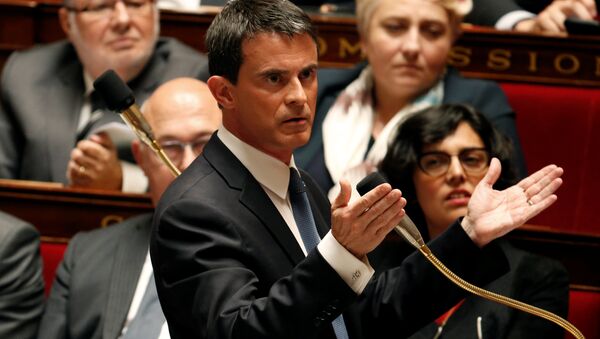 © REUTERS / Charles Platiau
Subscribe
International
India
Africa
A municipal worker in France has been suspended from office over a photomontage depicting the country's Prime Minister Manuel Valls as Adolf Hitler, according to the French commercial radio network RTL.

Over 100 Rallies Staged in France Amid Labor Bill Standoff
The mayor of the Paris suburb of Evry, Francis Chouat, has announced the temporary suspension of a municipal worker for photoshopping rude images of the country's Prime Minister Manuel Valls, the French commercial radio network RTL reported. Evry is a community in Essonne, about 25 km (15.5 miles) outside Paris.

The worker's first photomontage includes an image of Valls looking as Hitler with his notorious moustache, with a caption reading "Shut up and work!"The second image depicts Valls crossing a road in front of a car, along with a question and a series of multiple choice answers, parodying a driving test.

"Manuel Valls is crossing the road in front of your car: a) I do not reduce speed; b) I step on the gas; c) I stop when his head is under my wheels, and I start to slip; g) I stop and castrate him with a nail clipper; d) I make mincemeat out of him," the photomontage's caption reads.

Chouat was quick to express his indignation over the photomontages in an interview with the newspaper Le Parisien.

"This is not humor, it is a call to murder. As for the Prime Minister in the role of Hitler, it is beyond all understanding," he said.

The proposed law on labor reform has been widely criticized as it would make it easier for companies to lay off staff and cut payments for overtime work.

French cities have been rocked by mass protests since the labor reforms bill was signed late March; the demonstrators are mostly young and protesting against amendments to the French labor code that could lead to an increase in working hours, among other unpopular measures.