If Elected, Clinton May Enlist Her Husband to Lead the Economy 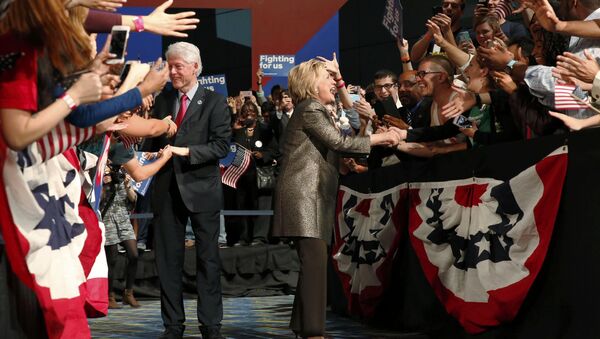 As former Secretary of State Hillary Clinton is increasingly likely to be the Democratic presidential nominee, political pundits are asking who she’ll choose as a running mate. While she hasn’t revealed any VP picks yet, she has hinted that economic issues could be taken on by her husband.

With Democratic primaries in Kentucky and Oregon on Tuesday, presidential hopeful Hillary Clinton hit the campaign trail over the weekend. During a rally in Fort Mitchell, Kentucky, the former First Lady suggested that her husband Bill, the 42nd president of the United States, could play a role in her administration.

"The economy does better when we have a Democrat in the White House," she said. "My husband, who I’m going to put in charge of revitalizing the economy, because, you know, he knows how to do it, and especially in places like coal country and inner cities and other parts of our country that have really been left out."

Hillary Clinton has suggested in the past that she would accept input from Bill Clinton. During a December 2015 debate, she suggested that she would "turn to [her husband], as prior presidents have" for special missions and economic revitalization.

Speaking during a separate rally in Kentucky last week, Mr. Clinton said he not only welcomed the opportunity, but had even suggested it.

"I asked to be given the opportunity – if she gets elected – to help the coal country and to help other parts of our country that never seem to go along with the ride when the economy come up," he said in Prestonburg.

"I volunteered that if Hillary got elected president, I would like to be tasked with the responsibility to take you along for the ride to America’s future."

The capacity in which Mr. Clinton would serve remains unclear, as the secretary of state has said in the past that she would not consider her husband for a cabinet position.

The appeal of the Clintons to coal country comes after the victory of Democratic rival Bernie Sanders’ victory in the West Virginia primary last Tuesday. Presenting a tougher challenge than the Democratic frontrunner anticipated, Sanders had made fighting income inequality and poverty a staple of his campaign.

Clinton faced opposition from coal miners in March when, in an attempt to stand tough on environmental issues, she said "We’re going to put a lot of coal miners and coal companies out of business."

Victories in Tuesday’s primaries would bring Clinton closer to the 2,383 delegates needed to clinch the nomination. She currently leads Sanders by 283 pledged delegates, according to the Associated Press.