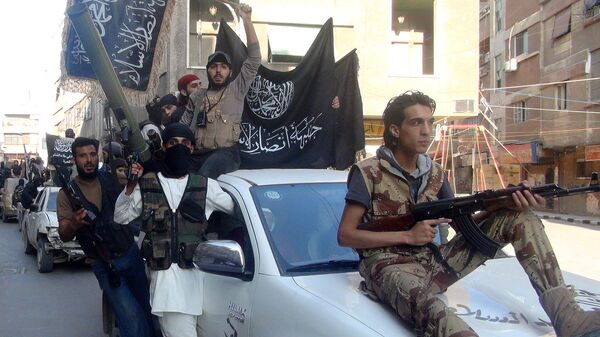 © AFP 2023 / RAMI AL-SAYED
Subscribe
International
India
Africa
Violent clashes between rival militant groups over control of a crucial stronghold near Syria's Damascus have caused hundreds of deaths among civilians and fighters in last couple of weeks.

Syrian War Rages on in Spite of an Extended Ceasefire, US-Russian Efforts
According to London-based monitoring group Syrian Observatory for Human Rights (SOHR), the Saudi-backed Jaish al-Islam group has been battling with al-Nusra Front-led groups Faylaq al-Rahman and Jaish al-Fustat since April 28.

The bloody fights erupted to the east of the Syrian Capital, in an area called Eastern Ghouta. It is a densely populated cluster of towns and villages that has been a battlefield since 2011, when the civilian war began.

Senior al-Nusra Front Member From Belgium Killed in Syrian Army's Strikes
SOHR, which is said to gain infromation from sources on the ground in Syria, reported that the escalation of the conflict began after members of Faylaq al-Rahman group attacked Jaish al-Islam’s stronghold.

Local residents and officials tried to prevent bloodshed, calling the sides to start talks in a series of protests. Despite that, battling sides continued to fight, constructing fortifications and blocking roads, the monitoring group added.

Rahman added that clashes claimed the lives of ten civilians, including a child and a doctor. The doctor, Nabil al-Daas, was the last gynecologist working in the area.

Jaish al-Islam is considered the major rebel faction in the area. One of its leaders, Mohammad Alloush, has presented rebels in Geneva talks on Syrian ceasefire, despite the legitimate government labeling him a terrorist.