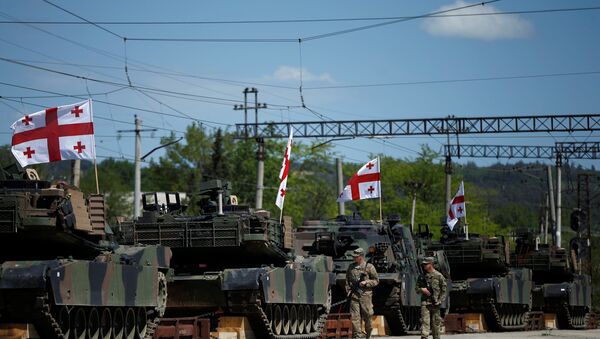 The US Department of Defense deployed M1A2 Abrams main battle tanks to Georgia to take part in the Noble Partner 16 war-games in what appears to be the latest display of Washington's military power at a time when NATO's muscle flexing has become increasingly frequent close to Russia's border.

Journalist Joseph Trevithick maintained that the move was meant to send Moscow a signal.

"The Pentagon has come to see armored vehicles as an important, if often slow, show of force. That's why a team of M1 Abrams main battle tanks made the long journey to the Republic of Georgia in early May 2016," he wrote for War is Boring.

Ex-Pentagon Chief: US President Must Swallow Pride, Work it Out With Putin
The military drills, the Pentagon reported, are ostensibly meant to increase Georgia's self-defense capabilities and train approximately 200 Georgian troops, who serve in the NATO Response Force (NRF). The 40,000-strong force was created to tackle challenges in any part of the world. It is made up of soldiers from the bloc's member states as well as NATO partners.

The DoD, according to Trevithick, also pursued other, unstated, goals.

"In addition to helping train the Georgians for routine tasks, the Pentagon no doubt hopes its tanks will make impressions in Moscow and in the capitals of America's European allies," Trevithick noted.

The US deployed Bradley infantry fighting vehicles, M-119 light towed howitzers and several wheeled-support vehicles in addition to the tanks. The games involve 650 US troops, 500 Georgian service members and 150 soldiers from the UK.

Offload complete! Training equipment for #NoblePartner 16 has made it to the Vaziani Training Area #tank #awesome pic.twitter.com/IawMaiKGDa

The military drills were launched on May 11 and are scheduled to end on May 26.