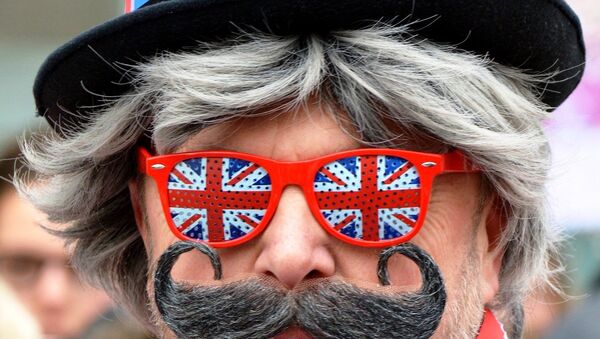 With less than five weeks to go before the British public vote in an In-Out referendum on the UK’s membership of the European Union, Sputnik has been out and about getting the word on the streets and uncovering an enormous lack of rigorous debate.

Commuters returning home from London were interviewed by Sputnik about what they are making of the various campaigns to keep the UK within the EU or to leave the union. Roger, a city worker, told Sputnik:

"Neither side really knows what the implications are and when you listen to both sides, you don’t know which is which."

A common grouse is the sheer power of the Brussels machine and the fear of a federal Europe. One commuter said:

"It started off as a free trade area, but it’s become the federal states of Brussels, so what you’re seeing is an attempt to effectively come up with an equivalent to the USA."

'Project Fear' to Keep UK in EU Set to Backfire as Brexit Support Grows
Jenny, an administration assistant, told Sputnik: "We know the main powers of Europe want to go towards being one united European state. I don’t particularly want that. Having one massive superstate is just going to cause lots of future problems. I think it’s dangerous. We can run our own states and still collaborate".

Those wanting to leave the EU have been deeply critical of the way UK Prime Minister David Cameron – who is fighting to keep the nation within the EU – has led the so-called 'Project Fear' campaign, warning that Armageddon will be the result of leaving. David, a plumber told Sputnik:

"They are scaring voters to stay in and deep down, I think a lot of people won't bother voting, because they don't know which way to vote."

Many commuters were critical of both sides in the campaign for making conflicting claims of what would happen to the British economy if the country voted to leave the EU.

Brexit Battle: UK Euroskeptic Accused of 'Lying' Over German Veto Claims
Sarah, who works in a law firm said: "Neither side has really been able to say what the implications are. In all cases there’s a lot of known unknown and some unknown unknowns. Either way it’s going to be a problem."

Some said the EU was already in a huge mess, with the migrant crisis dividing Europe and the Eurozone facing troubles ahead. One commuter told Sputnik: "The difficulty about this is that it doesn’t matter whether we’re in or we’re out. Europe is possibly going to change internally and we have no guarantee as to what the world economy is going to do and how it will affect us".

"We’ve been inside the EU for a long time and we’ve been hopelessly inadequate at fighting any causes from within. Why on earth would Germany want to let in one million migrants to undercut the local workers? How come suddenly Germany has this massive great say in Europe? It’s the elephant in the room. Germany rules the roost. They are the biggest in Europe and they call the shots. Germany is the USA of Europe."

"I think I can make an informed decision. I understand economics, to a degree and politics, to a degree. I was a total 'don't know' three months ago. My heart said get out, my head said stay in. Now my head says get the f*** out while you still can because it's going to fall to bits," said plumber Kevin.