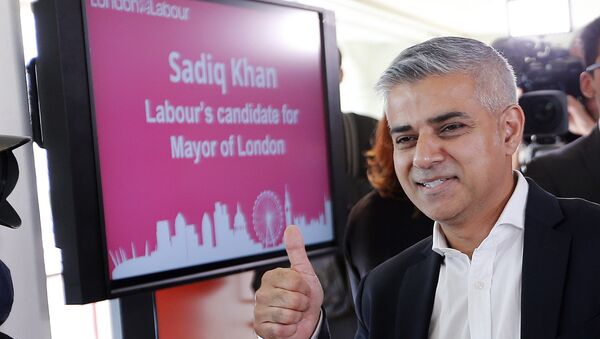 LONDON (Sputnik) – Sadiq Khan from the UK Labour Party has been officially named as the new mayor of London, becoming the first Muslim to hold the post.

"I promise to always be a mayor for all Londoners for every London regardless of your background," Khan said in the early hours of Saturday, as quoted by The Telegraph.

"This election was not about controversy and London today has chosen hope over fear, unity over division. I hope we will never face that stark choice again," Khan said.

Khan said he will work on giving Londoners the opportunity "not to survive but to thrive," promising better wages, security and a cleaner and healthier city.

What Will London Look Like Under New Labour Mayor Sadiq Khan?
Khan, 45, comes from a family of a Pakistani bus driver. Goldsmith’s campaign focused on Khan’s family background, trying to brand the former state minister for transport (also the first Muslim to hold the post, as well as the first Asian) as a supporter of Muslim extremists.

Local elections were held in the United Kingdom on Thursday.

The Labour Party managed to maintain control of key councils in the country, and showed growth in representation in Exeter in South West England. However, Labour fared badly in Scotland, losing 13 seats in the Scottish parliament, while the Conservatives gained 16.