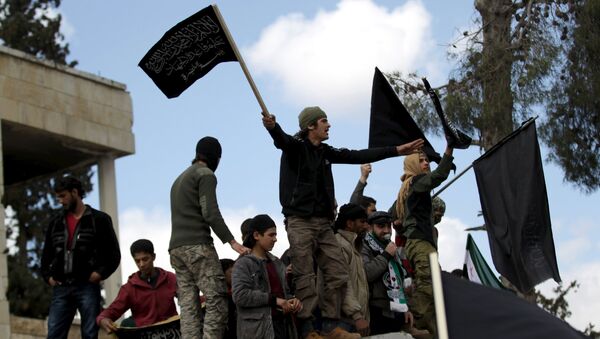 Al-Nusra Front terrorists may have been behind an attack on a refugee camp in Syria's Idlib, according to the Russian Defense Ministry.

The refugee camp could have been shelled from multiple rocket launchers used by al-Nusra Front terrorists in the region, the Russian Defense Ministry spokesman said Friday.

"Judging by the nature of destruction seen on photos and videos, the [refugee camp in Idlib] could have been either intentionally or by mistake struck from multiple rocket launchers, which are now often used by al-Nusra Front terrorists in the area," Maj. Gen. Igor Konashenkov said.

Syrian Army Denies Striking Refugee Camp in Idlib - Source
According to Konashenkov, photos of the site on social networks show that "there are no shell craters from aircraft ammunition and other traces of airstrikes."

He also said that no flights were carried out by aircraft, Russian or other, over Sarmada in Syria’s province of Idlib near the border with Turkey where the refugee camp had been struck.

"We have carefully analyzed the information from the flight control area in that region on May 4 and May 5, 2016. There were no flights by Russian or any other aircraft over Sarmada."

In the Line of Fire: Inside Look Into Dangerous Daily Life in Syria's Idlib
On Thursday, a refugee camp in Syria's Idlib near Turkey's border was reportedly hit by an airstrike, leaving at least 28 people, including women and children dead.

The Russian Defense Ministry spokesman said that Western media cited the Syrian Observatory for Human Rights based in the UK, however, there was no information on the attack on a refugee camp in Idlib on the SOHR's site. A statement about the strike on the camp was posted only on the SOHR's Facebook account without mentioning the date of the attack.

White House spokesman Josh Earnest also said on Thursday at a briefing that no US or coalition aircraft were operating in the area at the time of the airstrike.

A Syrian military source told RIA Novosti earlier in the day that the Syrian Army did not strike the refugee camp in the province of Idlib as well.