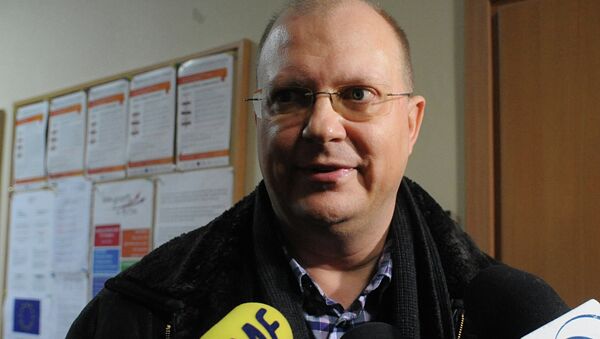 © AP Photo / Alik Keplicz
Subscribe
Rossiya Segodnya International Information Agency freelance correspondent Leonid Sviridov, who was banned from entering EU borderless Schengen area until December 2020 by Warsaw said on Thursday that he plans to call on Polish authorities to exclude him from the black list.

Poland Bans Rossiya Segodnya Reporter From Entry to Schengen Until 2020
MOSCOW (Sputnik) — Earlier in the day, Sviridov's lawyer Jaroslaw Chelstowski told Sputnik Poland that the correspondent was on the list of persons banned from entering Poland and Schengen zone states until December 14, 2020, according to Poland's Office for Foreigners.

"The next logical step is an official request to the Office for Foreigners to exclude me from the 'black list,' because the decision to ban me from entering Schengen area member states is a violation of Poland's 'Foreigners' Law.' It is said in the law that the data of the foreigner could be included in the 'black list' after the deportation procedure. There were no deportation in my case, because I have left the country on my own, implementing the administrative decision," Sviridov told RIA Novosti.

On October 24, 2014, Polish Foreign Ministry annulled Sviridov's accreditation. Soon after that, Polish authorities deprived him of residence permit and ordered the correspondent to leave the country. In mid-December, 2015, Sviridov left Warsaw for Moscow to begin legal proceedings against the Polish authorities.

Sviridov's case has been included in the Organization for Security and Co-operation in Europe (OSCE) monitoring reports on freedom of the media, which documents violations of journalists' rights within OSCE member states.