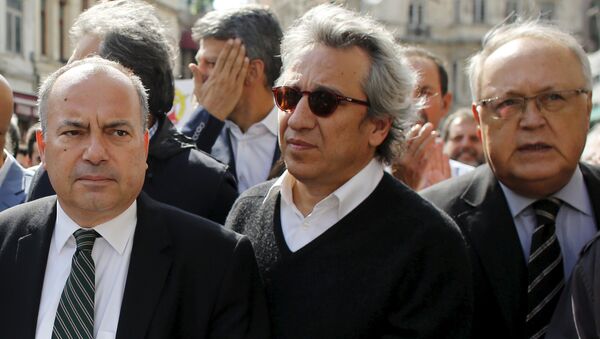 © REUTERS / Murad Sezer
Subscribe
Istanbul's Public Prosecutor's Office has prepared an indictment against chief editor of the Turkish newspaper Cumhuriyet Can Dündar and representative of the newspaper's office in Ankara Erdem Gul. In an interview with Sputnik, the journalists' lawyer Akın Atalay shared his opinion about the current prosecution process.

Journalists Union: Turkish Mass Media Policy at Odds With Democratic Values
The two journalists were arrested in November after they published an article bringing to light Turkey's secret arms deliveries to Syrian jihadists.

Earlier, journalists were accused of "military and political espionage," but the prosecutor's office has changed the wording of the charges to "disclosure of classified information, which had to be kept confidential in the interests of state security, as well as its domestic and foreign policy."

In an interview with Sputnik, the journalists' lawyer Akın Atalay criticized the prosecution process and the Turkish judicial system as a whole.

"Prosecutors in Turkey […] don't bother themselves with communicating with the public. They are not used to reporting their actions to the public, and that is why there is a constant information vacuum surrounding the trials. Why were they initially charged under one article, and then the wording has been changed? The prosecutor's office in Istanbul has not made any statements explaining this step," Atalay said.

The prosecutor's office has demanded prison terms of 10 to 25 years for the journalists. The next hearing of the case will be held on Friday, May 6.

"Most of the trials in Turkey should be completed within one court session. But this is not the case. The reason for this lies in the fact that the prosecutors initiate a criminal case, although they don't possess all necessary materials and have not issued them properly. As a result, courts have to make prosecutors' work, which slows down the process of justice and makes the investigation practically endless," Atalay said.

Turkey's crackdown on numerous journalists and restrictions on freedom of speech have been severely criticized by the international community, but so far the situation has not changed for the better.

Recently, an Istanbul court sentenced two other journalists of the Turkish newspaper Cumhuriyet — Ceyda Karan and Hikmet Çetinkaya — to two years imprisonment, after they published a caricature of the Prophet Muhammad from the French satirical weekly Charlie Hebdo in their article.

According to Atalay, the main role in such trials is being played by politics. No one is actually interested in proving the guilt of journalists and is just willing to sentence them to a maximum possible penalty.

"As for the court hearing, scheduled for Friday, I think the court will make a final decision. The whole process was originally an attempt of the authorities to put pressure on oppositional journalists and intimidate them. But the attempt was unsuccessful. They tried to charge them with four different crimes over one article. But these people are not afraid of such methods," the lawyer concluded.