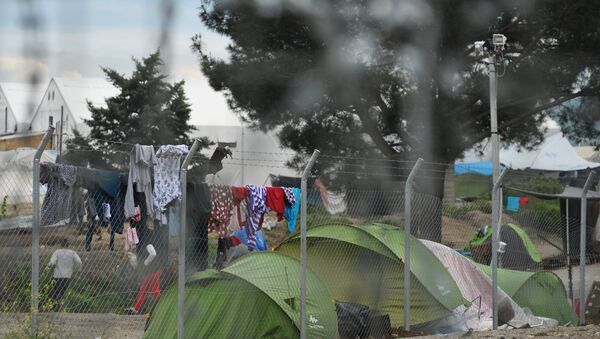 © Sputnik / Dmitry Vinogradov
/
Go to the photo bank
Subscribe
The recent proposal by the European Commission (EC) under which an EU member state refusing to take in an EU-approved refugee will carry the cost of their relocation elsewhere is unethical, the press office of Slovakia's Interior Ministry told Sputnik on Wednesday.

MOSCOW (Sputnik), Alexander Mosesov — Earlier in the day, the European Commission tabled a proposal under which an EU country will face a 250,000 euro [$287,000] charge for each refused EU-approved refugee.

"We have got a few questions about this idea, for example we do not understand how European Commission reached this number – €250,000, there is also an ethical dimension – someone wants to put 'a price tag' on human life," the press office said.

The ministry's press office also added that the reaction of EU countries that have "just coped with the economic crisis" and with high unemployment rates is under question.

EU to Charge Member States $287,000 for Every Refugee Denied Relocation
The $287,000 payment, dubbed "solidarity contribution" by Brussels, will be part of a fairness mechanism designed to enforce the Commission’s refugee relocation quotas and help those EU states that are handling a "disproportionate number" of asylum seekers.

In September 2015, the EU interior ministers, by a qualified majority, approved a plan to redistribute some 120,000 refugees throughout the bloc based on a quota system proposed by the European Commission.

Slovakia, the Czech Republic, Poland and Hungary have opposed the majority of EU states on the refugee quota issue, while the United Kingdom has used its opt-out clause to dodge of the mandatory program.

000000
Popular comments
the concept for east europeans : obey or pay. The illusion of being free while being EU/Nato members is slowly getting through by now.

md74
4 May 2016, 18:31 GMT1
000000
there are times when I'm not too sure about who the eu's role model is...adolph, napoleon, benito...idi???
michael
5 May 2016, 11:07 GMT
000000
Newsfeed
0
New firstOld first
loader
LIVE
Заголовок открываемого материала
Access to the chat has been blocked for violating the rules . You will be able to participate again through:∞. If you do not agree with the blocking, please use the feedback form
The discussion is closed. You can participate in the discussion within 24 hours after the publication of the article.
To participate in the discussion
log in or register
loader
Chats
Заголовок открываемого материала
Worldwide
InternationalEnglishEnglishMundoEspañolSpanish
Europe
DeutschlandDeutschGermanFranceFrançaisFrenchΕλλάδαΕλληνικάGreekItaliaItalianoItalianČeská republikaČeštinaCzechPolskaPolskiPolishСрбиjаСрпскиSerbianLatvijaLatviešuLatvianLietuvaLietuviųLithuanianMoldovaMoldoveneascăMoldavianБеларусьБеларускiBelarusian
Transcaucasia
ԱրմենիաՀայերենArmenianАҧсныАҧсышәалаAbkhazХуссар ИрыстонИронауОssetianსაქართველოქართულიGeorgianAzərbaycanАzərbaycancaAzerbaijani
Middle East
Sputnik عربيArabicArabicTürkiyeTürkçeTurkishSputnik ایرانPersianPersianSputnik افغانستانDariDari
Central Asia
ҚазақстанҚазақ тіліKazakhКыргызстанКыргызчаKyrgyzOʻzbekistonЎзбекчаUzbekТоҷикистонТоҷикӣTajik
East & Southeast Asia
Việt NamTiếng ViệtVietnamese日本日本語Japanese俄罗斯卫星通讯社中文（简体）Chinese (simplified)俄罗斯卫星通讯社中文（繁体）Chinese (traditional)
South America
BrasilPortuguêsPortuguese
NewsfeedBreaking
14:15 GMTRonaldo Will Cause as Many Problems as He Solves for Solskjaer, Ex-Liverpool Player Carragher Says
14:03 GMTXi Urges SCO to 'Resist' External Meddling After US, Australia Vow to Bolster Ties With Taiwan
14:02 GMTUN Security Council Holds Meeting on Afghanistan
13:39 GMTHitting US Debt Ceiling Could Trigger Recession, White House Says
13:32 GMTUnited Airlines Briefly Grounded Flights in US, Canada Due to Computer Issues, FAA Says
13:29 GMTDutch Acting Defense Minister Resigns Over Kabul Evacuations Chaos, Reports Suggest
13:27 GMTFrance Says It Cannot Trust Australia in Trade Talks After Canberra Ditched Joint Sub Deal
13:20 GMTPiers Morgan Says His New Job Will Be 'Stuff of Nightmares' for Meghan Markle
13:18 GMTIndonesia Wary of Australia's Plans to Acquire Nuclear Submarines
13:14 GMTUS Slaps New Hezbollah-Related Sanctions on Several Individuals
12:57 GMTPakistan Will Get ‘Badly Burnt’ If It Courts the Taliban Beyond a Point, Warns Author
12:51 GMTUS General Mark Milley Reportedly Downplayed George Floyd Protests' Severity in Talks With Trump
12:51 GMTIs Narendra Modi Emerging as the Most Sports Loving Indian Prime Minister?
12:28 GMTFAA Bans Drone Flights Over Texas Bridge After Thousands of Haitians Filmed Flocking to Area
12:27 GMT'Show Got It Wrong': Priyanka Chopra Apologises After Taking Flak Over 'The Activist' Format
12:05 GMTNicki Minaj Tweet That COVID-19 Vaccines Cause Impotence Sparks Protest Outside CDC HQs - Video
12:01 GMTPelosi Asked After Capitol Riot If WH Staff Did Anything But 'Kiss' Trump's 'Fat Butt', Book Claims
11:48 GMTArmenian Police to Block Streets Near Central Square Due to Planned Rallies
11:32 GMTUK Military 'Actively Recruiting' New Spies for Deployment in Asian Region Amid AUKUS-Caused Waves
11:14 GMTPunjabi Activists Clash With Police in Delhi During Anti-Farm Law Protests - Video