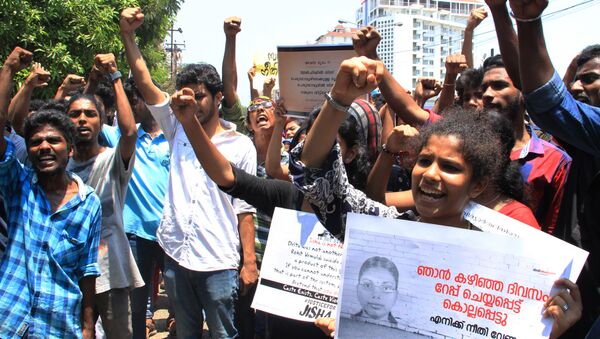 A 30-year-old woman from India's lowest traditional caste has been brutally raped, murdered and gutted in the southern state of Kerala, sending shock waves through her community.

The law student, whose name has not been revealed for legal reasons, had undergone a grisly attack and was murdered in her isolated house. The victim's mother, a day-laborer, returned home after her shift to find the woman's half-naked body with her intestines ripped out and strewn on the ground in a pool of blood. She had sustained more than 30 injuries.

Although the grotesque event took place on April 28, news about the incident emerged only on May 3 following a police probe.

Yatish Chandra GH, Superintendent of Police, told Sputnik: "Basically, it's a gruesome murder. Multiple injuries were there. Definitely, there was rape and a subsequent murder."

When asked about the motives, he said: "Various theories are going around and we are also working on it. I can confirm the exact motive only when facts [emerge] and only then can we establish the series of events."

Drought Woes: Farmers Forced to Cancel Marriages in Arid India
Medical reports have also confirmed that a sexual attack had taken place. The suspect is thought to have been between 25 and 30 years of age. The police have taken at least two people into custody in connection with the incident.

The victim and her mother lived in an isolated area; her mother was said to be mentally unstable. They were 'untouchables', the lowest group in India's caste hierarchy, or 'Dalits' as they prefer to call themselves; the word Dalit means "oppressed." There are currently 201 million Dalits living in India, comprising over 16% of its population.

Speaking to Sputnik, Giri Shankar, one of the victim's professors at the Government Law College in Ernakulam, said the girl was silent and mostly introverted. He said: "She was not that much talkative and had a limited number of people in her circle. She had just one or two friends who have now enrolled as advocates."

The incident has come at a time when the state of Kerala is heading for crucial assembly elections. While the local opposition parties have attempted to capitalize on the incident by blaming it on government ineffectiveness, local authorities have pledged to severely punish the perpetrators.