Moscow's Concerns Over Arrival of US Missiles in Korea 'Justified' - Expert 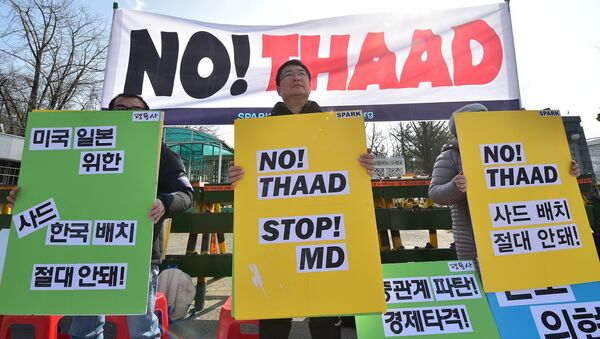 Pentagon Spending $640Mln on New THAAD Anti-Missile Batteries - Reports
In an interview with Sputnik, Michael Madden, an expert on North Korea who AP lauded for his "encyclopedic knowledge of the government elite," said that Russia's drive against the US deployment of the Terminal High Altitude Area Defense (THAAD) system in South Korea can be described as well-grounded.

The interview came after the White House announced that it would continue talks on the deployment of this new American anti-missile defense system on South Korean territory.

"Moscow and Beijing have perfectly legitimate arguments to make against the deployment of the THAAD system in South Korea, especially given the fact that Seoul earlier tried to develop its own missile defense system. So Russia is perfectly justified in not wanting THAADs deployed in South Korea," Madden said.

On the other hand, he suggested that the PTHAAD system may help resolve North-South tension regarding joint US-South Korean drills, which have repeatedly been condemned by Pyongyang.

"I suppose that one of the pluses of the deployment of the THAAD system is that it might reduce personnel exercises that the US conducts in South Korea," he reasoned.

North Korea Ready to Halt Nuclear Tests If US Stops Drills With South Korea
Meanwhile, White House spokesman Josh Earnest pointed out that the THAAD would only be oriented towards the threat posed by North Korea, rather than towards any other country.

He spoke as Russian Foreign Minister Sergei Lavrov and his Chinese counterpart Wang Yi protested against the deployment of US anti-missile systems in the region during a joint press-conference, urging Washington to respect the legitimate concerns held by Russia and China.

If it is deployed, it will directly impact the security strategies of China and Russia, Mr. Wang said. Sergey Lavrov, in his turn, stressed that North Korea's actions should not be used as an excuse for escalating tensions.