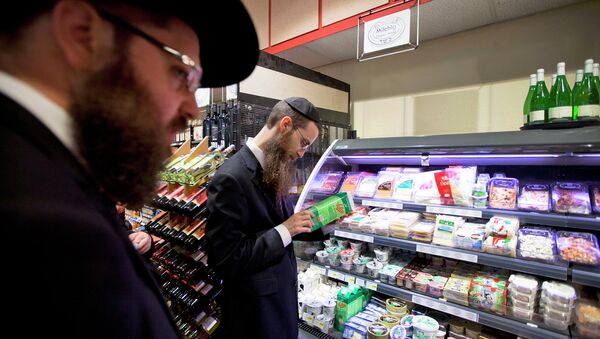 These numbers are accompanied by a decrease in absolute number of cases charged by police, 128 cases having been charged in 2015, compared to 138 in 2014.

Additional analysis of statistics in time shows that, while in 2014 there were evident peaks in criminal activity corresponding to the Israeli military Operation Protective Edge in the Gaza Strip, in 2015 crimes are distributed evenly throughout the year. According to the report, "Expectations that anti-semitic crime would gradually return to levels seen prior to the 2014 war in Gaza were proved incorrect."

Campaign Against Antisemitism's chairman Gideon Falter expressed his concerns regarding these numbers, threatening that, should criminal activity against Jews rise and number of cases charged decrease, British Jews will "have no choice but to emigrate."

According to Falter, should the trends remain the same, "the [British] Jewish community will be faced with the kind of rampant antisemitism seen in other European countries, which has left Jews feeling fearful and abandoned."

CAA's official position regarding reasons for increase in antisemitic crimes is connected with rise of "violent ideologies of Islamism and neo-Nazism."

"Whilst Islamists and neo-Nazis agree on little, they both agree that Jews are their enemy and must be violently oppressed," the CAA statement says.

000000
Popular comments
Well, for a start, the Knesset could do better than this: "British are dogs" www.ynetnews.com/articles/0,7340,L-3866929,00.html
elsa.zardini
2 May 2016, 01:58 GMT2
000000
I wonder if there is a specific group of perpetrators or if it spread across the community?
michael
2 May 2016, 02:25 GMT
000000
Newsfeed
0
New firstOld first
loader
LIVE
Заголовок открываемого материала
Access to the chat has been blocked for violating the rules . You will be able to participate again through:∞. If you do not agree with the blocking, please use the feedback form
The discussion is closed. You can participate in the discussion within 24 hours after the publication of the article.
To participate in the discussion
log in or register
loader
Chats
Заголовок открываемого материала
Worldwide
InternationalEnglishEnglishMundoEspañolSpanish
Europe
DeutschlandDeutschGermanFranceFrançaisFrenchΕλλάδαΕλληνικάGreekItaliaItalianoItalianČeská republikaČeštinaCzechPolskaPolskiPolishСрбиjаСрпскиSerbianLatvijaLatviešuLatvianLietuvaLietuviųLithuanianMoldovaMoldoveneascăMoldavianБеларусьБеларускiBelarusian
Transcaucasia
ԱրմենիաՀայերենArmenianАҧсныАҧсышәалаAbkhazХуссар ИрыстонИронауОssetianსაქართველოქართულიGeorgianAzərbaycanАzərbaycancaAzerbaijani
Middle East
Sputnik عربيArabicArabicTürkiyeTürkçeTurkishSputnik ایرانPersianPersianSputnik افغانستانDariDari
Central Asia
ҚазақстанҚазақ тіліKazakhКыргызстанКыргызчаKyrgyzOʻzbekistonЎзбекчаUzbekТоҷикистонТоҷикӣTajik
East & Southeast Asia
Việt NamTiếng ViệtVietnamese日本日本語Japanese中国中文Chinese
South America
BrasilPortuguêsPortuguese
NewsfeedBreaking
17:46 GMTBlast Heard Over Iran's Natanz, Where Nuclear Facility Located
17:32 GMTSouth African Province at Centre of Omicron COVID Variant Sees More Children in Hospital
16:54 GMTPolish Prime Minister Orders Cybesecurity Alert Ahead of UN Forum
16:52 GMTGreek Prime Minister Assures Vatican That Condition of Migrants in Greece Improved
16:21 GMTUS Warns of ‘Terrible Consequences’ of Possible Chinese Invasion of Taiwan
16:14 GMT‘Killer Robots’ Threat Persists as US Unwilling to Discuss Ban on Lethal Autonomous Weapons Systems
16:00 GMTLionel Messi Reveals He 'Never' Wanted to Become Best Football Player
15:39 GMTPutin, Biden Will Hold a Video Call on Tuesday Evening
15:36 GMTGiant Christmas Tree Set Up Near Church of the Nativity in Bethlehem
14:52 GMTParty Like It's 1939: German Chancellor's Send-Off Compared to Nazi Rally
14:48 GMTParents of Michigan School Shooter Suspect Plead Not Guilty to Involuntary Manslaughter Charges
14:26 GMTFrance's Republicans Party Picks Valerie Pecresse as Presidential Candidate
14:10 GMTOne of Critical Race Theory Founders Says He's Been Receiving Voicemails 'Full of Venom' for Months
14:07 GMTPaw Control: Cat Owners in UK May Face £500 Fine for Not Microchipping Their Pets
14:03 GMTDanish Company Wants to Rent a Russian Kuril Island to Make 'Green' Hydrogen for Japan
13:43 GMTNo Coronavirus, No Moon Landing: Survey Shows High Trust in Conspiracy Theories in Italy
13:42 GMTAt Least One Dead, 41 Suffer Burn Injuries After Indonesia's Semeru Volcano Erupts
13:29 GMTChinese Yutu-2 Rover to Study Mysterious Cube-Shaped Object on Moon, Report Says
13:15 GMTPrince William Had Secret 'Cyber Relationship' With Britney Spears, Lauren Bush, New Book Claims
13:15 GMTNot Quite a Shot in the Arm: Italian Anti-Vaxxer Sports Fake Limb in Attempt to Get COVID Cert