All Talk and No Walk: Poroshenko Promises, But Fails to Deliver 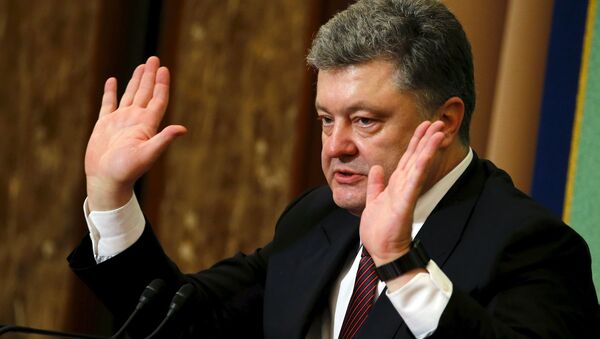 Before his election Ukrainian President Petro Poroshenko was making bold promises left and right. But time is passing and some of his promises are left unfulfilled. Here is a sober look at how good the Ukrainian president is at keeping true to his word.

This article remembers Poroshenko's past promises and analyzes whether the Ukrainian president kept true to his words.

Poroshenko is known as the owner of Roshen, the large-scale confectionary company from where he gained the nickname "Chocolate King." During the 2014 Presidential election, Poroshenko promised to "get rid" of his private assets and sell Roshen if elected.

"If I'm elected as a President of Ukraine, I would play fair and sell Roshen. As President I want to and will care only about the well-being of Ukraine," the oligarch said.

He did end up getting elected as the president, but as the time went on Poroshenko seemed not too eager to get rid of his candy business. A year after the election, when asked about his promise, Poroshenko claimed he couldn't sell Roshen because nobody wanted to buy his company.

Not So Sweet Deal: Poroshenko Accuses Russia of Meddling in Sale of Roshen
It's been two years since Poroshenko was elected and he still owns the candy enterprise. Too sweet to get rid of, it seems.

Moreover, the recently leaked Panama Papers showed Poroshenko had moved his company's assets to the British Virgin Islands two months after the 2014 election, thus hiding his company's profits and evading taxes while serving as the president, which goes in a direct violation of the Ukrainian constitution. Amusingly, the latest news about Poroshenko's offshore deeds came out while his government was campaigning against offshore companies.

Another of Poroshenko's promises was to immediately end the military operation in Donbass. A day after being elected president, Poroshenko said he'd end the war in Eastern Ukraine in a week.

"I will sign a decree on ceasefire for one week. Those who won't lay down their arms during this period would be destroyed," Poroshenko said, certain that the Ukrainian Army would crush the forces of self-proclaimed Donbass republics in less than a week.

On the first day of his presidency, Poroshenko announced that starting from 2015 Ukrainians would not need visas to travel in the EU. When 2015 came in and the agreement hadn't been reached, Poroshenko realized he had bit more than he could chew.

"We need to accelerate the plan of introducing a visa-free dialogue with the EU," he said last December in the Verkhovna Rada.

Last week, the European Commission finally made a proposal to the Council of the EU and the European Parliament to add Ukraine to the list of countries whose citizens can travel to the Schengen area without a visa. The important question now is how long will the EU take or whether it will actually adopt the visa-free regime with Ukraine.

A week before the 2014 elections, Poroshenko promised that one of his main objectives during his presidency would be to end corruption in Ukraine.

Poroshenko Offended After US Media Refers to Ukraine as 'Corrupt Swamp'
A couple of years have passed and Poroshenko has yet again failed to keep his promise. In 2015, Transparency International ranked Ukraine as 142nd out of 175 investigated countries and a recent Gallup poll revealed that 81 percent of Ukrainians don't think that the government is doing enough to fight corruption.

Even the US government, the closest of Ukraine's allies, seems to be changing its opinion on Kiev. Last month, the New York Times published an article calling Ukraine a "corrupt swamp" highlighting the government unwillingness to make real changes to battle corruption.

Along with the fight against corruption, Poroshenko promised to take "decisive steps" to improve the country's economy by bringing in more foreign investment.

Ukraine Faces Economic, Corruption Challenges After Yatsenyuk Resignation
When it comes to the economy, things aren't much better. The economic situation in Ukraine has been steadily deteriorating as the country's GDP fell by 6.8 percent in 2014, while inflation soared to 24.9 percent. According to IMF projections for 2015, Ukraine's GDP was expected to contract by 9-11 percent with inflation amounting to 46 percent.

Earlier this year, Aivaras Abromavicius resigned from the post of Economic Development Minister because he simply couldn't do the job effectively. Meanwhile, Natalia Jaresko, the country's finance minister, hasn't done a better job either. Her policy of strict economization in an attempt to stabilize the country's economy became a nightmare for certain socially-underprivileged categories of Ukrainians, such as small-business owners and pensioners.

Saakashvili Plots Return to Georgia After Ukraine Fiasco
Last spring Poroshenko declared that he'd only appoint regional governors exclusively from people from local councils of municipal governments of respected regions. Soon after that the president ended up appointing Mikheil Saakashvili, a former Georgian president, as the governor of the Odessa Region.

What to Expect From Poroshenko's Future Promises?

Poroshenko promised that by 2020 Ukraine will reach a "European standard of living," so that the country can apply for EU membership. However, for now both of these things seem highly unattainable and considering Poroshenko's presidential term expires in 2019, he won't be in the office to be held accountable for his promise.