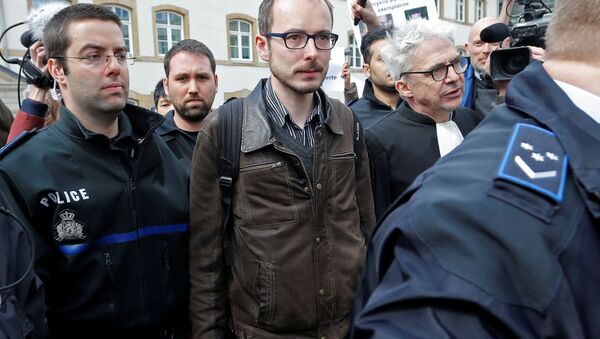 Three men who exposed the way hundreds of firms enjoyed the benefits of a benign tax regime by routing money through Luxembourg in a series of "sweetheart deals" went on trial Tuesday (April 26) amid allegations of "intimidation" by the authorities.

Two former employees at services firm PwC, Antoine Deltour and Raphael Halet, and journalist Edouard Perrin go on trial facing charges over the leak of thousands of documents that exposed the LuxLeaks scandal.

#LuxLeaks trial ended for today. We support Deltour. #Whistleblowers are brave — must be protected, not prosecuted! pic.twitter.com/vt8IAIgHTS

The scandal emerged when the International Consortium of Investigative Journalists released a series of documents exposing Pepsi, IKEA, AIG, Coach, Deutsche Bank, Abbott Laboratories and nearly 340 other companies which had secured secret deals from Luxembourg that allowed many of them to slash their global tax bills.

Something's wrong when those who expose shady dealings are prosecuted and those they expose aren't #LuxLeaks pic.twitter.com/hc9haKRxTG

Since then, the European Commission ruled that Luxembourg and the Netherlands have granted selective tax advantages to Fiat Finance and Trade and Starbucks, respectively. These are illegal under EU state aid rules.

However, Deltour, Halet and journalist Edouard Perrin all face charges over the affair. Former auditor Deltour and Halet are accused of stealing documents from the database of the accounting firm PwC, Halet is further charged with being behind a separate leak and Perrin — the journalist who originally exposed the story — is charged with being an accomplice to all the charges.

EU lawmaker Fabio De Masi, from the German Linke party said, ahead of the trial:

"Luxembourg's judiciary is trying to intimidate those who have unveiled some of the dirty secrets of the Grand Duchy. Without people like Deltour and Perrin, neither the public nor the European Parliament would have been aware of the massive scope of tax dumping in the EU. And the European Commission would not have been in a position to significantly extend its state aid investigations on tax rulings across all Member States."

The Commission found that Luxembourg has granted selective tax advantages to Fiat's financing company and the Netherlands to Starbucks' coffee roasting company. In each case, a tax ruling issued by the respective national tax authority artificially lowered the tax paid by the company.

The European Parliament set up a special investigation panel, known as the TAXE committee, to look into tax practices within the union. However, plans to extend its powers to look far wider into how much Commission President Jean-Claude Juncker and Eurogroup chief Jeroen Dijsselbloem knew about the tax practices have been scuppered.