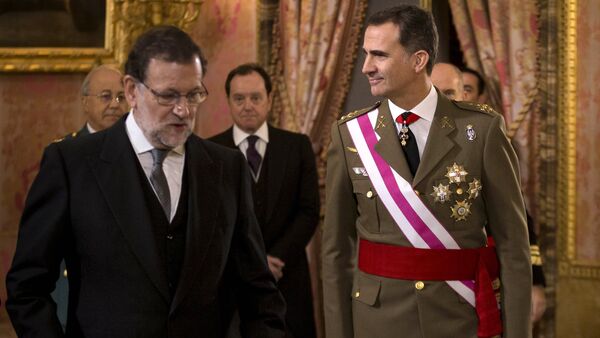 © AP Photo / Daniel Ochoa de Olza, File
Subscribe
Spanish King Felipe VI is expected to hold a meeting on Monday with the leaders of eight political parliamentary parties of the country in order to form country's government, according to local media.

Spanish Socialists Fail to Secure Parliamentary Support For 2nd Time
MADRID (Sputnik) — Spanish King Felipe VI started on Monday the last set of consultations with the leaders of the country's parliamentary parties in an attempt to unblock a political impasse in the country and propose a candidate for the post of prime minister, local media reported.

According to the EFE news agency, Felipe VI is expected to hold a meeting on Monday with the leaders of eight political parties, including Pedro Quevedo from the small New Canarias group. On Tuesday, the king will meet the leaders of the parties that finished in the top four positions in December's general election.

Following these consultations, Felipe VI should nominate a new candidate for prime minister to be voted on by the congress of deputies. New elections could be held on June 26 if the parties fail to find common ground before the May 2 deadline.

Podemos Leader Proposes to Form Left-Wing Coalition Government in Spain
On December 20, Spain held a general election the results of which ended the established two-party system, in place in the country for more than 30 years.

At least 176 seats are required for a parliamentary majority, necessary to form a government.

After nearly four months of negotiations the Spanish parliamentary parties have been unable to form a coalition in order to get the required number of seats.