Money Talks: Who is Financing the US Presidential Campaign? 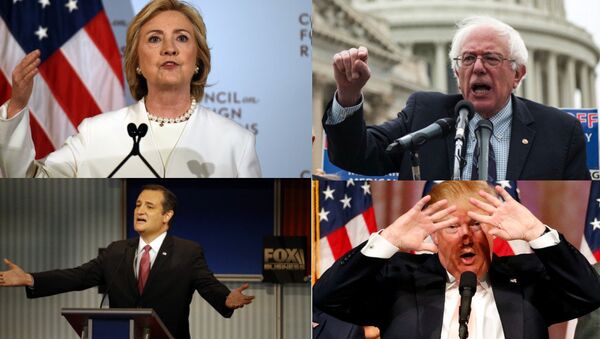 © Sputnik / Collage
Subscribe
The US presidential candidates and their affiliates have spent over a billion dollars on the campaign trail, with over $176 million of that amount provided by a handful of financiers, energy company owners and construction magnates. Russian business newspaper RBC offers an interesting rundown on who gets how much and from where.

'A Fixed System': New York Primaries Prove Predetermination of US Elections
Just over six months are left in the run up to the presidential elections in November. The Democratic Party has primaries remaining in 19 states, the Republicans in 15. A number of key states (including New York, Florida, Texas, and Massachusetts), have already voted. Key remaining states include Pennsylvania, California and Indiana, results from which will help to determine who among the two viable candidates on each side will represent their respective party in November.

So far, polls suggest, former US Secretary of State Hillary Clinton remains the clear frontrunner, leading against Democratic rival Vermont Senator Bernie Sanders, but also against Republican frontrunner Donald Trump. According to Fox News polling from earlier this month, 49% of Americans would be ready to vote for Clinton, versus 39% for Trump.

And Clinton, RBC notes, "also has a strong lead in fundraising." In early April, data compiled by the Center for Responsive Politics, as well as candidates' filings to the Federal Election commission, calculated that $222 million of the total funds raised went to the Clinton campaign. The Sanders campaign, for its part, raised $139.8 million.

Among the Republicans, the business newspaper notes, Texas Senator Ted Cruz, Donald Trump's only serious opponent, "was greeted coolly by donors at the start of the campaign," with contributors favoring former Florida Governor Jeb Bush and Senator Marco Rubio. "But when Trump began to win primaries and Bush and Rubio dropped out, large capital holders were forced to change their strategy."

The Hillary Effect: Female President Idea Scares Men Into Supporting Trump
"By late April Cruz collected $122 million (Bush ended his campaign with $159 million, Rubio with $119 million). And the work continues. In late March, Republican donors met in New York, where they decided to provide additional support to Cruz…Many who funded the Bush and Rubio campaigns in recent weeks have been busy attracting investors for the Texas senator."

At the same time, RBC notes, "Trump's campaign raised only $36.7 million, with $24.6 million of that money provided by the billionaire himself, and another $9.5 million in private donations, mostly small individual contributions. In spite of the considerable difference in the funds raised, Trump confidently won the April 19 primary in New York, receiving 90 delegates to support him at the convention in July, while Cruz didn't get a single delegate."

According to the FEC, since summer 2015, 158 individuals and families donated sums of $250,000 or more, the sum total of their contribution amounting to $176 million. Another 200 families donated over $100,000 to their preferred candidates.

"Among the 158 most generous sponsors, the New York Times calculated that 64 are employed in the financial sector, 17 in the energy sector, and 15 in real estate and construction, with 12 contributors working in or owning media assets, and 12 in the health sector. The majority of the donations went to the Republicans."

US Billionaire Soros Donates $6Mln to Support Clinton's Presidential Run
The largest donation to the Clinton campaign was made by American business magnate George Soros, whose company Soros Fund Management allocated $7 million to supporting the former secretary of state.

At the same time, RBC said, in contrast to Clinton, "Bernie Sanders, known for his criticism of money from Wall Street, is supported not by big business, but by ordinary voters. Nearly all of the $139 million collected for his campaign came through private donations, 66% of it in the form of small sums."

In addition to contributions from individuals, families and business, this election has already seen Super PACs figuring more prominently than ever before. "According to The Washington Post, their number has reached over 2,300, and they have collected funds exceeding $600 million. In 2012, Super PACs raised a total of $828 million through the entire election cycle."

Death of the Two-Party System? US Election Could Turn Into a 4-Way Race
Ultimately, RBC noted, "large businesses in the US often finance several candidates at once. This strategy is aimed at preventing the victory of a particular party or politician. In the course of the current campaign, over 60 donors funded both the Clinton and Bush campaigns. For example, Lloyd Blankfein, the chairman of the board of directors of Goldman Sachs, donated to three candidates – Cruz, Bush and Clinton, simply because he considers self-described democratic socialist candidate Bernie Sanders to be the most dangerous candidate."

Sputnik leaves it to readers to reach their own conclusions about the significance of the figures, and whose campaigns they finance. In any case, RBC's analysis is just one more indication that the world, including Russia, is watching the American election very closely, not only to get a handle on future US policy, but also to observe whether the US practices what it preaches when it comes to rhetoric about democracy.

000000
Popular comments
One Clinton screwed up the White House. The next Clinton is going to demolish it. USA might be going down the sewers if the people don't think properly.
copius
23 April 2016, 22:53 GMT1
000000
Trump finance himself, but he should consider super PAC'S in some states , specially those with high delegations. IF he go to party headquarters and meet activists wherever he goes, and explain and LISTEN, they will have requests, they will align and promote him. They also a GREAT source of demo graphical insight. they would soften other candidates, Rubio included. ONCE the party activists gear for a candidate and is winning, anyone against it becomes a TRAITOR. In NY Niagara, they may be talking about ex dump sites clean up. I know.. RUN!! But Trump have the power of not a lousy lawyer. But a BUSINESSMAN. And MANAGER. He could rally and get it done. CHEAP!! The Indians there are been like Palestine. With folks building in their lands. So that could be fixed too. Give them lands elsewhere. And so on. IF Clinton wins, I'm afraid she is coming to GET PUTIN. And that could even trigger a war.
cast235
24 April 2016, 03:02 GMT1
000000
Newsfeed
0
New firstOld first
loader
LIVE
Заголовок открываемого материала
Access to the chat has been blocked for violating the rules . You will be able to participate again through:∞. If you do not agree with the blocking, please use the feedback form
The discussion is closed. You can participate in the discussion within 24 hours after the publication of the article.
To participate in the discussion
log in or register
loader
Chats
Заголовок открываемого материала
Worldwide
InternationalEnglishEnglishMundoEspañolSpanish
Europe
DeutschlandDeutschGermanFranceFrançaisFrenchΕλλάδαΕλληνικάGreekItaliaItalianoItalianČeská republikaČeštinaCzechPolskaPolskiPolishСрбиjаСрпскиSerbianLatvijaLatviešuLatvianLietuvaLietuviųLithuanianMoldovaMoldoveneascăMoldavianБеларусьБеларускiBelarusian
Transcaucasia
ԱրմենիաՀայերենArmenianАҧсныАҧсышәалаAbkhazХуссар ИрыстонИронауОssetianსაქართველოქართულიGeorgianAzərbaycanАzərbaycancaAzerbaijani
Middle East
Sputnik عربيArabicArabicTürkiyeTürkçeTurkishSputnik ایرانPersianPersianSputnik افغانستانDariDari
Central Asia
ҚазақстанҚазақ тіліKazakhКыргызстанКыргызчаKyrgyzOʻzbekistonЎзбекчаUzbekТоҷикистонТоҷикӣTajik
East & Southeast Asia
Việt NamTiếng ViệtVietnamese日本日本語Japanese俄罗斯卫星通讯社中文（简体）Chinese (simplified)俄罗斯卫星通讯社中文（繁体）Chinese (traditional)
South America
BrasilPortuguêsPortuguese
NewsfeedBreaking
09:18 GMTZuckerberg Reportedly Approved Using News Feed to Push Pro-Facebook Coverage in Image-Reshaping Bid
08:59 GMTPakistan Wants to Help Train Afghan Security Forces, Ambassador Says
08:52 GMTMadhya Pradesh Couple, Young Girl Forced to Dance With Bike Tyres Around Their Necks For Elopement
08:52 GMT2,500 Rhino Horns Torched in Indian State of Assam to Convey Anti-Poaching Message
08:23 GMTNo More Coal-Fired Plants Built by China Abroad, Xi Jinping Announces
08:22 GMTUkraine's Internal Affairs Ministry Says Shots Fired at Car of Zelenskyy's Aide Shefir
08:07 GMTVolcano Continues to Erupt on La Palma in Canary Islands
08:03 GMTIran Offers India Joint Commission on Afghanistan, Wants 'Preferential' Trade Pact to Be Finalised
08:00 GMTSenior US Army Official Says Russia ‘Primary Military Threat to Homeland’
07:59 GMTIndia's Modi Calls His Visit to US Opportunity to Strengthen Ties Between Countries
07:47 GMTMoscow Refutes Polish Claims About Nord Stream 2 Impact on Gas Price Spike, Source Says
07:40 GMT'Thousands' of Haitian Migrants Reportedly Released in US, Undercutting Biden Admin's Expulsion Vows
07:35 GMTIndia: Traders in BJP Stronghold Go on Strike as Big Retailers Enter Jammu and Kashmir
07:08 GMTBoris Johnson Calls Joe Biden a 'Living Deity'
07:00 GMTManager, Not Players, Is the Difference at the Top of Premier League
06:54 GMTPortugal Wants to Cooperate With Russia on Economic Crises, COVID-19, Refugees, President Says
06:53 GMTFinland's Burglaries Drop 40 Percent Amid COVID-19 Pandemic
06:41 GMTNumber of People Injured in Russia's Perm University Shooting Climbs to 43, Health Ministry Says
06:30 GMTUN Chief Guterres Got Letter From Taliban Requesting to Join 76th Session of General Assembly
06:27 GMTEgypt Condemns Failed Coup Attempt in Sudan, Backs Transitional Government