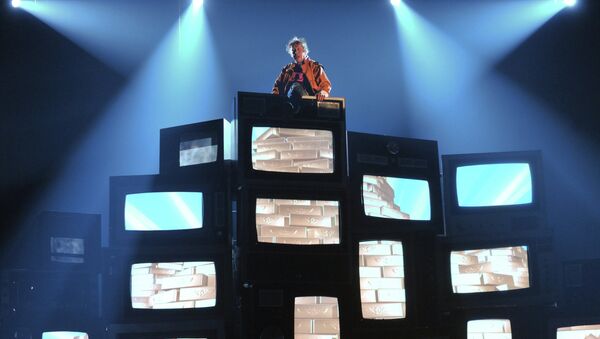 Western governments and Big Business are trying to shift people’s attention from the overwhelming social injustice and banks and companies which are robbing them by not paying taxes, Lode Vanoost, journalist and former deputy speaker of the Belgian Parliament, said in an interview with Radio Sputnik.

Alternative Media Challenge Western Bias - President of Ecuador
Up to two-thirds of people in France and Germany believe their media and governments provide biased information about crimes committed by migrants, a new survey by Sputnik.Polls suggests. Almost half of British respondents share the same opinion regarding their respective national institutions.

“I believe that the media exaggerates the scope of violent crimes committed by migrants. This is extremely worrying within the context of the migrant crisis in Europe where rightwing parties and movements use these so-called media ‘facts’ to further their agenda,” Lode Vanoost said.

Sea Watch: ‘EU Turns Blind Eye to Migrant Deaths in the Mediterranean’
He said that the events that happened in Cologne on New Year’s Eve were good example of such coverage because the context these events were put in was totally wrong.

“Things like that do happen but the idea is to exaggerate the role of migrants in such events, even though numerous cases of hooliganism during football games are never put in such a way that we really, really need to act upon immediately. These things always happen within the political agenda of the media and used by politicians as well. This raises absolutely terrifying problems. How can people make political decision when they don’t even have proper information?” Vanoost wondered.

“There is no denying that security problems always exist in big cities and there are security and safety problems in general. The thing is if you really want to tackle the causes of these problems you have to make a good analysis and base you decision on this analysis to find solutions. If you base your opinion on information that is not objective then you are not going to solve the problem. This is what is now happening with the refugee and migrant crisis…”

“We need a whole other kind of editors who would look at issues on the basis of their value to society as a whole.”

“You might get the impression that as soon as you have good journalists and good editors everything will be OK, but it’s also the matter of who owns the media, if they are commercial or otherwise, etc.,” Vanoost said.

“The best thing to do when you have a regressive political agenda is to stimulate and give benefits to media that portray that kind of political agenda, sensationalizing things, overgeneralizing them, focusing the people’s attention on migrants away from the big banks and big companies, which are robbing them by not paying taxes. ‘Look at these other people; they are the ones you should look at!’”

“I’m not saying that societal problems do not exist, but this is a kind of media that deviates people’s attention from the big problems that we have in our modern society,” Vanoost said in conclusion.

Up to two-thirds of people in France and Germany believe their media and governments provide biased information about crimes committed by migrants, according to a new survey by Sputnik.Polls.

Respondents in France said they have very little trust in their government and media; in all, 17 percent of respondents think they receive objective information about crimes which might be committed by migrants.

In Germany, 25 percent are willing to trust their media and government. In Britain, 36 percent of respondents trust this type of information about migrants.