Fear and Loathing in the Arabian Nights 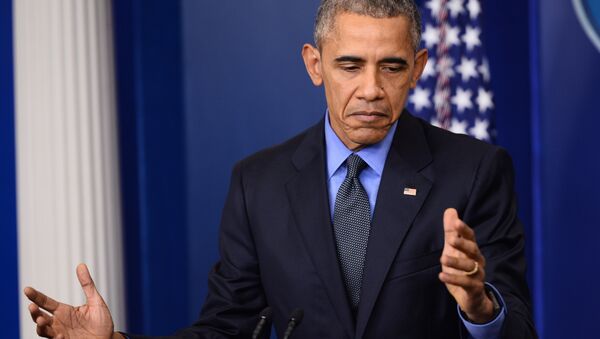 Pepe Escobar
All materials
US President Barack Obama landed in Saudi Arabia for a GCC petrodollar summit and to proverbially “reassure Gulf allies” amidst the oiliest of storms.

The Doha summit this past weekend that was supposed to enshrine a cut in oil production by OPEC, in tandem with Russia – it was practically a done deal – ended up literally in the dust.

The City of London – via the FT – wants to convey the impression to global public opinion that it all boiled down to a dispute between Prince Mohammed bin Salman – the conductor of the illegal war on Yemen —  and Saudi Oil Minister Ali Al-Naimi. The son of  — ailing — King Salman has been dubbed “the unpredictable new voice of the kingdom’s energy policy.”

Riyadh's Blackmail: Is Washington Afraid of Saudi Threats to Dump Dollar?
A famous 3 am call did take place in Doha on Sunday. The young Salman called the Saudi delegation and told them the deal was off.  Every other energy market player was stunned by the reversion.

Yet the true story, according to a financial source with very close links to the House of Saud, is that “the United States threatened the Prince that night with the most dire consequences if he did not back down on the oil price freeze.”

So – predictably — this goes way beyond an internal Saudi matter, or the Prince’s “erratic” behavior, even as the House of Saud is indeed racked by multiple instances of fear and paranoia, as I analysed here.

As the source explains, an oil production cut would have “hindered the US goal of bankrupting Russia via an oil price war, which is what this is all about. Even the Prince is not that erratic.”

Iran had made it more than clear that after the lifting of sanctions it does not have any reason to embark on a production cut. On the contrary; oil contributes to 23% of Iran’s GDP. But as far as the House of Saud is concerned – feeling the pain of a budget deficit of $98 billion in 2015 — a moderate cut was feasible, along with most of OPEC and Russia, as Al-Naimi had promised.

Saudis Refuse to Work With Others, Blame Russia and Iran for Low Oil Prices
Another key variable must also be taken into account. Not only the whole saga goes way beyond an internal Saudi dispute; no matter what Washington does, the oil price has not crashed as expected. This would indicate that the global surplus of oil has been largely sopped up by falling supply and increasing demand.

As a GCC-based oil market source reveals, “have you noticed how much attention Kerry and Obama have been giving Saudi Arabia out of all proportion to the past to keep that oil price down? Yet WTI is up and holding over $40.00 a barrel. That’s because oil demand and supply is tightening.” The oil market source notes, “oil surplus is now probably less than a million barrels a day.” So the only way, in the short to medium term, is up.

Blowback from His Masters’ Voice?

The House of Saud, by flooding the market with oil, believed it could accomplish three major feats.

1) Kill off competition – from Iran to the US shale oil industry.

3) Inflict serious damage to the Russian economy. Now it’s blowback time – as it could come from none other than His Masters’ Voice.

The heart of the whole matter is that Washington has been threatening Riyadh to freeze Saudi assets all across the spectrum if the House of Saud does not “cooperate” in the oil price war against Russia.

That reached the tipping point of the Saudis shaking the entire turbo-capitalist financial universe by issuing their own counter threat; the so-called $750 billion response.

The — burning — issue of freezing all Saudi assets across the planet has come up with the US Congress considering a bill exposing he Saudi connection to 9/11.

Trump: Classified Part of 9/11 Report Shows ‘Very Profound’ Saudi Role
The declassification and release of those notorious 28 pages would do little to rewrite recent history; 9/11 – with no serious investigation — was blamed on “Islamic terror”, and that justified the invasion of Afghanistan and the bombing/invasion/occupation of Iraq, which had no connection to 9-11 nor any weapons of mass destruction.

The 28 pages did intimidate the House of Saud and Saudi intelligence though. Especially because the odd sharp brain in Riyadh could make the connection; the 28 pages were being paraded around in Western corporate media before the OPEC meeting to keep the Saudis in line on the oil war against Russia. That may have been yet another Mafia-style “offer you can’t refuse”; if the House of Saud cuts oil production, then it will be destroyed by the release of the 28 pages.

No one really knows how much Saudi Arabia has tied up in US Treasuries – except for a few insiders in both Riyadh and Washington, and they are not talking. What is known is that the US Treasury bundles Riyadh's holdings along with other GCC petrodollar monarchies. Together, that amounted to $281 billion two months ago.

Yet the Saudis are now saying they would get rid of a whopping $750 billion. A New York investment banker advances that “six trillion dollars would be more like it.” Earlier this year, I revealed on Sputnik how the House of Saud was busy unloading at least $1 trillion in US securities on the market to balance its increasingly disastrous budget. The problem is no one was ever supposed to know about it.

The fact is the US and the West froze $80 billion in assets that belonged to the deposed head of the Egyptian snake, Mubarak. So a freeze tied up with framing Saudi Arabia for terrorism would not exactly be a hard sell.

For all the pledges of eternal love, it’s an open secret in the Beltway that the House of Saud is the object of bipartisan contempt; and their purchased support, when push comes to shove, may reveal itself to be worthless.

Now picture a geopolitical no exit with a self-cornered House of Saud having both superpowers, the US and Russia, as their enemies.

Terrorists Catch a Break in Luxurious Saudi Prisons
Obama’s visit is a non-event. Whatever happens, Washington needs to sell the fiction that the House of Saud is always an ally in the “war on terra”, now fighting ISIS/ISIL/Daesh (even if they don’t.) And Washington needs Riyadh for Divide and Rule purposes – keeping Iran in check. This does not mean that the House of Saud may not be thrown under the bus in a flash, should the occasion arise.

As the source close to Riyadh advances, “the real nuclear option for the Saudis would be to cooperate with Russia in a new alliance to cut back oil production 20% for all of OPEC, in the process raising the oil price to $200.00 a barrel to make up for lost revenue, forced on them by the United States.” This is what the West fear like the plague. And this is what the perennial vassal, the House of Saud, will never have the balls to pull off.