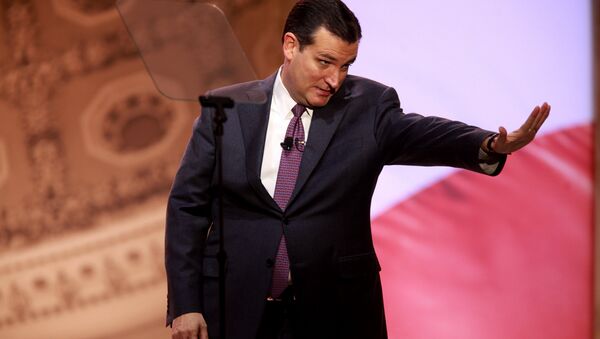 Republican US presidential candidate Ted Cruz, calling for security patrols of "Muslim neighborhoods,” has refused, along with his staff, to meet with those constituents he intends to police.

On Monday, during National Muslim Advocacy Day on Capitol Hill, his Muslim constituents requested a meeting with the Senator and were refused. For weeks, Muslims, traveling from Texas, attempted to set up a meeting with the presidential hopeful, but he turned them down.

One of the participants, Alia Salem, executive director of the Dallas-Fort Worth chapter of the Council on American-Islamic Relations (CAIR), told AlterNet that Cruz’s office had initially agreed to set up a meeting with an unnamed foreign policy adviser from the campaign, but that offer was rejected.

“I said no, we’re American Muslims here to talk about US issues,” she told AlterNet. “We want to speak with the chief of staff or legislative aid or other staff—anyone who would be relevant to the policies we would like to address.”

Subsequent attempts to meet were ignored, and out of 23 Texas lawmakers, Cruz was the only one who refused a meeting. On Monday morning, participants of Advocacy Day went to his office, but were turned away.

"This is an indication of what a Cruz presidency would look like," said Salem. "As Texans, it's really insulting that we would travel all the way from Texas to meet with our elected official and not be given 15 minutes of a staffer's time. They just completely declined to meet with us. But it's their job requirement to listen to their constituents. The fact that they would not even give us the time of day is disgusting."

Ted Cruz: Politics Trumps the Constitution, Calls for Anti-Muslim Gestapo
Meanwhile, Frank Gaffney, a man the Southern Poverty Law Center describes as “one of America’s most notorious Islamophobes. Gripped by paranoid fantasies about Muslims destroying the West, Gaffney believes that ‘creeping shariah,’ or Islamic religious law, is a dire threat to American democracy,” is serving as the foreign policy advisor for the Cruz presidential campaign.

As Advocacy Day was underway, Gaffney published an op-ed in the Hill, accusing those participating in the event of being part of the Muslim Brotherhood, urging lawmakers to refuse to meet with their constituents.

“Congress is on notice: As long as organizations associated with Islamic supremacism like the USCMO and its member organizations dominate ‘Muslim Advocacy Day’ on Capitol Hill, it will actually be Muslim Brotherhood Advocacy Day,” he wrote. “And legislators should have nothing to do with either its participants or its programs."