Kerimov: 'They Confiscated My Residence Permit, Press Card and Passport' 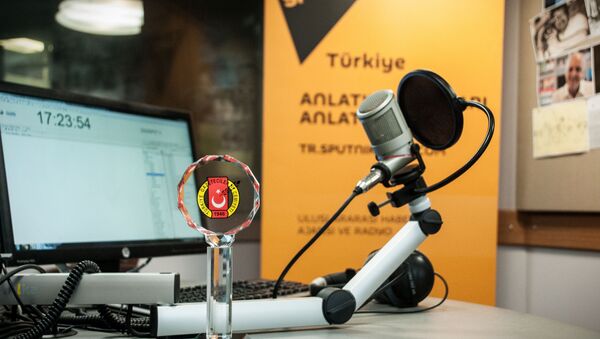 © Sputnik
Subscribe
Russian journalist and Sputnik-Turkey's hub chief, Tural Kerimov, was recently denied entry into Turkey. His documents were confiscated by Ataturk International Airport's security services without any explanation, a move that might be connected to the Turkish government's decision to block access to Sputnik News Agency's website last Thursday.

In an interview with Sputnik, Kerimov shared his impressions about the incident as well as the behavior of Turkish authorities which he perceived as "not unexpected," but "surprising."

"They confiscated my residence permit and press card, which I received from the Directorate General of Press and Information at the Prime Minister's Office. The situation is interesting, but it is even more interesting taking into account the fact that on the night from Saturday to Sunday I was leaving Istanbul and going to Moscow. Then I was stopped by the border control for ten minutes, they checked me, but then said that there was no problem," the journalist explained.

Sputnik News Agency in Turkey Working as Usual After Website Shutdown
According to Kerimov, he received an ordinary stamp in his passport and continued his journey to Russia without any problems. On his return, he, however, was surprised to find himself being refused entry by Turkish authorities, who after a long check seized his passport and other relevant documents.

"For a long time, 10 minutes or so, they checked my passport and called their colleagues from the border service. Afterwards, everything started. I was taken in to the department for examination and verification of arriving passengers, where I was asked to submit my documents," Kerimov said.

The journalist said he showed the airport officials all of his relevant documents including his boarding pass, international passport as well as his press card and residence permit, which were issued by the Turkish authorities.

"I don't really understand why, if I am an undesirable person to enter the country, these documents were not confiscated and canceled when I was in the country and was leaving voluntarily. This raises questions. In fact, they then refused to return these documents and are also holding onto my passport right now," Kerimov stated.

Commenting on the possible reasons behind the incident, the journalist assumed that the behavior of Turkish authorities might be connected to Ankara's recent decision to block access to Sputnik News Agency's website. He, however, added that there still had not been any explanations from the Turkish side neither on the border incident, nor on the government's motivation behind the ban of the media source.

Sputnik's Turkish Bureau Chief Prohibited Entry Into Turkey
On Wednesday, the Deputy Prime Minister of Turkey stated that "security reasons" were behind the deportation of Sputnik journalist Tural Kerimov from the country.

Sputnik News' website was blocked in Turkey on Thursday evening without warning, with the Turkish Telecommunications Department citing "administrative measures."

The closure of Sputnik-Turkey's bureau can be viewed as another example of Turkish President Recep Tayyip Erdogan's crackdown on press freedoms in the country. In 2015, 14 Turkish journalists were imprisoned, and Zaman, one of the country's largest opposition newspapers, was shuttered by the government.