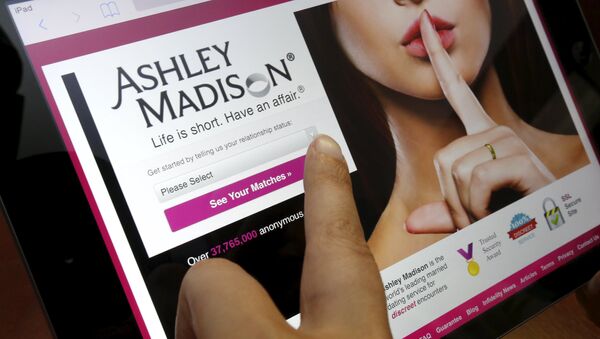 Last year’s massive breach of the infidelity website Ashley Madison outed millions of would-be adulterers. Those who wish to join lawsuits against the company will have to use their real names, the judge presiding over the case has ruled.

Surprised? Ashley Madison Hack Proves DC Is Cheaters Capital of America
The breach revealed that the company did not hold up their end of the $19 fee to be able to use the "Full Delete" option to remove all identifying information from the service.

Further, it was revealed that the company made fake female accounts to lure men to the site. Of the roughly 37 million users registered at the time of the breach, over 31 million were male and almost none of the 5.5 million female accounts are thought to have been authentic.

Defrauded users who seek to participate in the lawsuits will not be allowed to remain anonymous, but must reveal their real identities.

"The disclosure of Plaintiffs' identities could expose their sensitive personal and financial information—information stolen from Avid when its computer systems were hacked—to public scrutiny and exacerbate the privacy violations underlying their lawsuit," US District Judge John Ross ruled. "At the same time, there is a compelling public interest in open court proceedings, particularly in the context of a class action, where a plaintiff seeks to represent a class of consumers who have a personal stake in the case and a heightened interest in knowing who purports to represent their interests in the litigation."

Those involved have until June 3rd to decide whether they would like to be named and proceed or drop off of the case.

At least three people outed as having accounts on the website killed themselves following the breach.