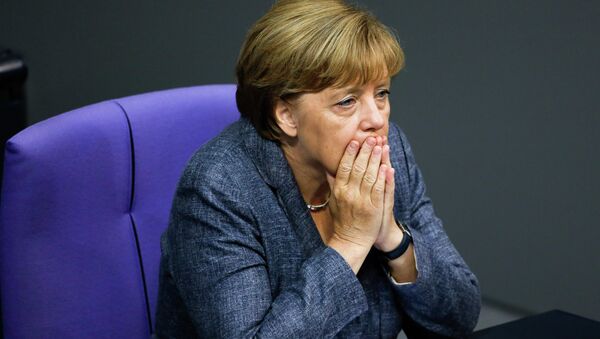 Turkey Urges Germany to Open Criminal Case Over Satire About Erdogan
Earlier, Turkish authorities sent the German government an official note in which they asked Berlin to prosecute German satirist Jan Böhmermann for mocking Turkish President Recep Tayyip Erdogan in his poem, which he performed during a TV show on the German TV Channel ZDF.

The prosecution of the journalist could be started only with the special permission of the German government, which after long consideration was issued last week.

Following the decision, the popularity of German Chancellor Angela Merkel has fallen by 11 percent in mere days. According to a recent ARD survey, only 45 percent of respondents are satisfied with the policy of the country's leader, compared to 56 percent of supporters in early April.

The majority of Germans have criticized the decision of the federal government to start prosecution of the German satirist on charges of "insulting governmental institutions or representatives of another state".

Lose-Lose Situation: Why 'Merkel is Trapped' Over Satire About Erdogan
According to a survey carried out by the German newspaper Bild am Sonntag, 66 percent of the respondents oppose the prosecution, arguing that it would infringe on the press freedom in the country, while only 22 percent of those questioned view it as the right decision.

Many prominent German artists and journalists have expressed their solidarity with Böhmermann and called on the country's authorities to immediately stop the inquiry.

In his poem, which Böhmermann performed on March 31, he harshly criticized the Turkish leader for his policy using insulting phrases such as "President with a small d*ck" and "Most of all he likes to f*ck goats and suppress minorities".
Although, the ZDF first removed the poem from its multimedia library perceiving it as insulting, it now has promised Böhmermann its full legal support during the investigation.

"We will go with him through all instances," ZDF-representative Thomas Bellut told German magazine Spiegel Online.

For its turn, the magazine also criticized Merkel's move arguing that she does not make any effort to give in to Erdogan's eccentric demands.

"What has remained of the Chancellor who was once honored by the US President for her commitment to freedom? Böhmermann's case shows: Angela Merkel doesn't fight enough for human rights," the magazine noted.