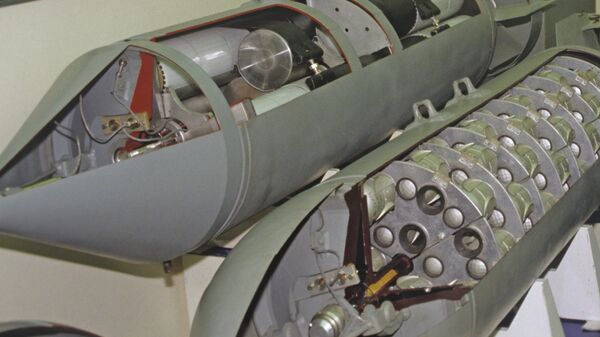 When the first bombers were used in warfare, pilots were literally dropping bombs on enemy targets by hand. A lot has changed since then and modern planes now use advanced cluster bombs, hitting targets with extreme precision and devastation from afar. Here’s a closer look at the development of cluster bombs dropped from military aircraft.

Hitting enemy targets from a plane is no easy task. It's one thing to find, identify and destroy a single stationary enemy object, but quite a challenging mission to successfully carry out a massive airstrike, causing serious damage to enemies on the ground, TV Channel Zvezda reported.

The Germans were first to introduce advanced anti-personnel bombs during World War II. Luftwaffe pilots were dropping the AB-23 SD-2 and AB-250 bombs, named the Butterfly Bombs, because after a bomb cylinder disintegrated in the air, it released a bunch of individual bomblets that looked like a butterfly.

The AB-250 bombs had as many as 180 submunitions that were released in the air. The AB bomb-series were the first cluster bombs ever used in combat history and they proved to be highly effective against enemy manpower.

The Soviet Army used PTAB bombs against enemies on the ground. Bombs were dropped mainly from the IL-2 Ground Attack Aircraft bomber, which could carry 192 bombs on board. Each PTAB bomb had between 1.5 and 2.5 kg of explosives and destroyed the area of 15 square meters.

During intense fighting, such as at the Battle of Kursk, IL-2 pilots took on board more than the maximum capacity of 192 bombs. According to historian Andrei Rumin, IL-2 planes were packed with 300 PTAB bombs in Kursk to destroy all the Wehrmacht tanks rolling toward Soviet positions.

Since the 1970s, the Soviets began using RBK-250 AO-1 cluster bombs dropping them from Su-17 bombers and Mi-24 attack helicopters. Each bomb had 150 little clusters and could cover the area of 4,800 square meters.

The bombs were effectively used during the Soviet war in Afghanistan and the first Chechen war. A few Soviet planes, packed with RBK-250 bombs, could "re-design the mountainous landscape of Afghanistan" in front of terror-stricken Mujahedeen, according to TV Channel Zvezda.

Starting in the 1990s, the Russian military began to develop RBK-500 and PBK-500 cluster bombs with a special target-locking system. When a target is identified and bombs are dropped, the self-targeting technology accelerates munitions to a speed of up to 2,000 meters per second for maximum destruction.

Military experts say that when these bombs lock on their targets, whether it's an infantry vehicle, a tank or any other armored vehicle, they have virtually no chance of survival, Zvezda said. If a bomb doesn't hit its target, the self-destruct system will be activated and the bomb is eliminated.