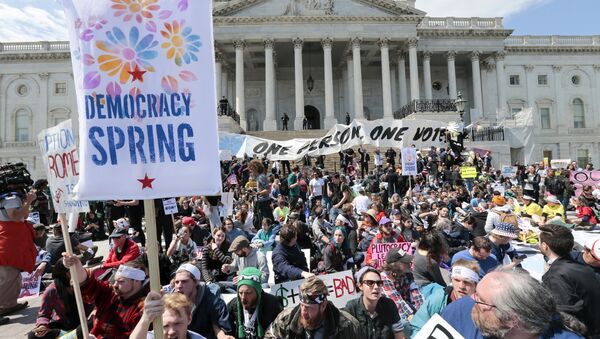 On day two of Democracy Spring, a week of civil disobedience in the nation’s capital to get money out of politics, activists including AFV’s executive director Lauren Windsor interrupted Majority Leader Mitch McConnell’s weekly press stakeout.

#DemocracySpring Enters Second Day After Hundreds Arrested at US Capitol
McConnell is the leading opponent of campaign finance reform, one of the main goals of the Democracy Spring protests.

“We got a glimpse inside his thinking on the issue with the release of the Koch tapes in 2014, detailing his commitment to deregulating money in politics throughout his time in elected office. It is abominable that the Senate Majority Leader believes that the passage of the campaign finance reform bill McCain-Feingold was the ‘worst day’ of his political career. Today, we interrupted him to say that we will no longer be silenced by the flood of big money into our elections by the 1%."

#DemocracySpring Movement Launches Voting Rights Sit-In in Washington DC
On Monday, over 400 people were arrested in what is being called the largest sit-in, and the most arrests to ever take place at a protest, at the Capitol.

“Eighty-five percent of Americans agree that we need to address the legalized bribery that is our pay to play system and today’s impressive turn out shows the resolve of these patriotic defenders of the Republic in demanding that Congress immediately take action to redress these easy to resolve grievances,” Democracy Spring’s communications director Peter Callahan told Sputnik News.