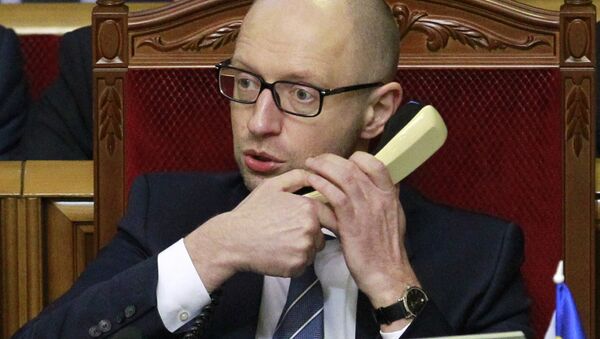 "I decided to resign from the post of Ukraine's prime minister. On Tuesday, April 12, the decision will be submitted to the Verkhovna Rada [Ukrainian parliament]", Yatsenyuk said as quoted by Ukrainian TV channels Sunday.

Yatsenyuk said that destabilization in Ukraine is "inevitable," if a new government is not formed.

"We cannot allow one thing [to happen] — the destabilization of the executive power during the war [in the southeastern region of Donbass]. This prospect is inevitable, if after the resignation, a new government is not formed."

In the Noose: 'Prime Minister Jaresko' Couldn’t Save Ukrainian Economy
He added that his party, the Popular Front, will remain to be a part of the coalition in the parliament.

Recently, Ukrainian President Petro Poroshenko nominated Chairman of the Verkhovna Rada and his party fellow Volodymir Groisman for the new country's prime minister. The news about Groisman's candidacy came a few days after Ukrainian Finance Minister Natalia Yaresko announced her willingness to become Prime Minister herself and lead a "government of technocrats".

In February, Yatsenyuk described the ongoing political crisis in the country as "artificial" and urged the Ukrainians to continue on the course of reforms.

vidar myrvold
10 April 2016, 17:22 GMT
000000
chrrev, Murdering hundreds in his US backed overthrow of the popularly elected government and then the genocide of people speaking Russian in the east of the country to the point of 'civil war' and nearly world war three was considered by Yats to be "stable", so I'm at a loss for an idea of what he considers "unstable".