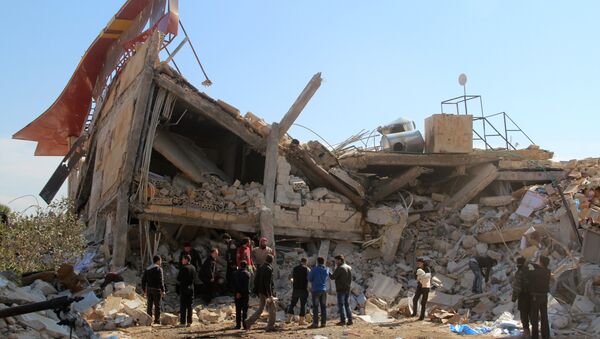 A report by the US-based think tank accusing Russia of deliberately bombing hospitals during its anti-terrorists campaign in Syria has no hard proof to back up its questionable claims, US analysts told Sputnik.

WASHINGTON (Sputnik) — A new report from the US-based think tank Atlantic Council accusing Russia of deliberately bombing hospitals during its anti-terrorists campaign in Syria has no hard data to back up its questionable claims and comes from an organization notorious for its propaganda against Russia, US analysts told Sputnik.

"This publication from the Atlantic Council claims that it is based on ‘analysis of open source and social media intelligence (OSSMINT).’ This OSSMINT is a field completely invented by [report co-author Eliot] Higgins," Helena Cobban, a leading US expert on modern Syria and veteran Middle East correspondent, said.

MSF: US Is Censoring Official Kunduz Hospital Bombing Report
However, the so-called OSSMINT materials, presented on Tuesday, are a misleading mixture of unreliable sources using a methodology that has never been seriously accepted, Cobban pointed out.

"OSSMINT consists of little more than capturing and aggregating claims made by anyone [that Higgins] chooses on social media; and over any sub-sample of a time period that he chooses to focus on. It's an echo chamber for whatever he chooses to echo," she noted.

Higgins’ methodology in the report mixed reliable and verifiable information with unverifiable anecdotal claims of the most dubious accuracy, Cobban said.

"It's worth underlining that by relying on both open source information and on what [Higgins] calls ‘social media intelligence,’ which is completely unverifiable, his method is completely unscientific," she pointed out.

Serious reconnaissance photographic data about the pattern of Russia and US airstrikes over Syria was potentially available, yet the Atlantic Council report cited none whatsoever, Cobban observed.

"Every government intelligence service with constant satellite surveillance over Syria… [including the United States, Russia and Israel] would be able to provide… solid numbers and figures about the location and authorship of the major military actions taken in Syria over the past 30 months. This report uses no such data," she said.

In Syria, Putin Smashes Terrorists Like Kutuzov Smashed Napoleon
Higgins had a strong history of partisanship in favor of the anti-government forces in Syria and has never had, nor had he claimed any formal training in military affairs or military science, Cobban noted.

"In August 2013, [Higgins] and his blog became some of the main actors accusing the Syrian government of having used chemical weapons against the rebels near Damascus," she pointed out.

However, that analysis was within days challenged and disproven by a team of real specialists in ballistics led by the veteran MIT military-tech specialist Theodore Postol, Cobban added.

Data Shows Airstrikes on Syrian Hospital Launched by US-Led Coalition Jet
University of Illinois Professor of International Law Francis Boyle told Sputnik that the pattern of wild accusations using alleged evidence is based on no serious, accepted methodology reflecting the anti-Russian bias of the body that published it.

Russia started its counter-terrorism operation in Syria in September 2015, at the request by Syrian President Bashar Assad. On March 15, Russia began withdrawing the largest bulk of its military from Syria after accomplishing its objectives.

The Russian Defense Ministry issued daily reports on the results of its air campaign in Syria and released footage showing its air force striking targets.