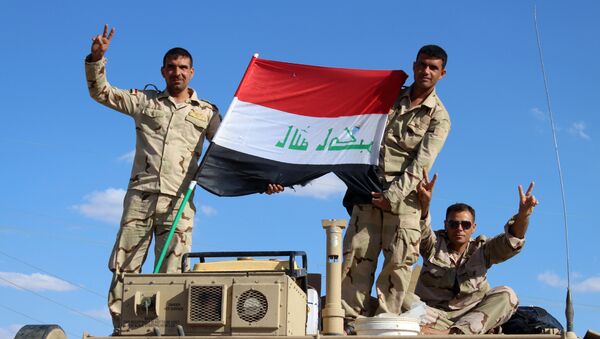 © AFP 2022 / MOADH AL-DULAIMI
Subscribe
Daesh "is retreating" after losing the strategically important Syrian city of Palmyra, Iraqi politician Adnan al-Saraj told Sputnik, adding that the next steps in the multinational counterterrorism efforts involve liberating Deir ez-Zor and Raqqa in Syria, as well as Mosul in Iraq.

Russian Officer Killed in Palmyra Proves 'Courage is not Fiction'
Al-Saraj, a member of the State of Law Coalition and the head of the Iraqi Center for Media Development, described Palmyra's liberation as "disappointing" for Daesh.

On March 27, the Syrian Arab Army announced that the ancient city world-famous for its magnificent ruins was free after a month-long offensive against the terrorist group. The victory has been largely seen as a major blow to the militants. 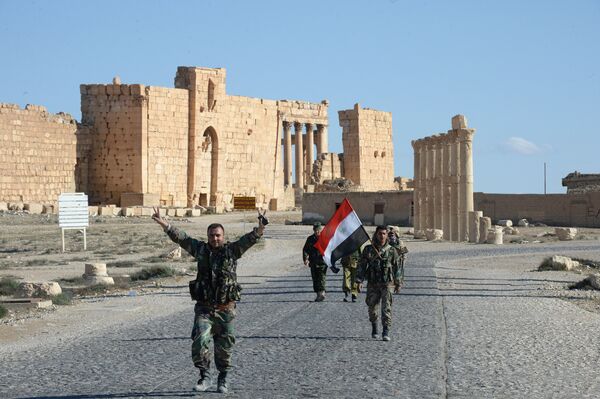 The Syrian Arab Army, assisted by Russian warplanes and its local allies, could now focus on freeing the city of Deir ez-Zor and Daesh's de facto capital of Raqqa, the Iraqi politician observed. These victories will help to secure the Syrian-Iraqi border, as well as provide a significant boost to the morale of the Iraqi security forces.

The victory in Raqqa will also "give an opportunity to cut supplies from Daesh and make the areas which lead from Syria to Mosul safe, and other northern areas like Saladin and Anbar," al-Saraj explained.

The Iraqi security forces had their Palmyra moment in December 2015 when they liberated Ramadi, the capital of the Anbar province. An operation to free another major urban center in Anbar is currently underway. On Saturday, Baghdad-led forces and their allies rescued approximately 1,500 civilians from an underground Daesh prison in the city of Hit, alternatively spelled as Heet. 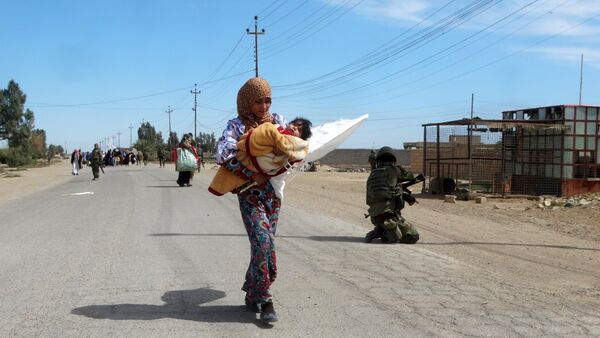 Pentagon is 'Actually Training Islamist Militants' in Syria
In recent months, both Damascus and Baghdad have been able to turn the tide of war against Daesh — thanks in no small measure to outside support. In Syria, Russia's limited military engagement has been instrumental in helping the SAA score victories.

In March, the IHS Conflict Monitor released an analysis saying that the self-proclaimed caliphate had shrunk by 22 percent in the last 15 months. Al-Saraj confirmed that the Iraqi security forces have freed four provinces and area advancing towards Mosul, the key Daesh stronghold in the country.

"It is clear that Daesh started retreating and withdrawing in a disorganized way. It lost a lot and is incapable of regaining anything in Iraq. The cities that have been freed witness development and vitality now," Al-Saraj asserted.

Mosul and Raqqa are the two major Daesh strongholds. Should the group lose them, its reign of terror in Iraq and Syria could well be over. 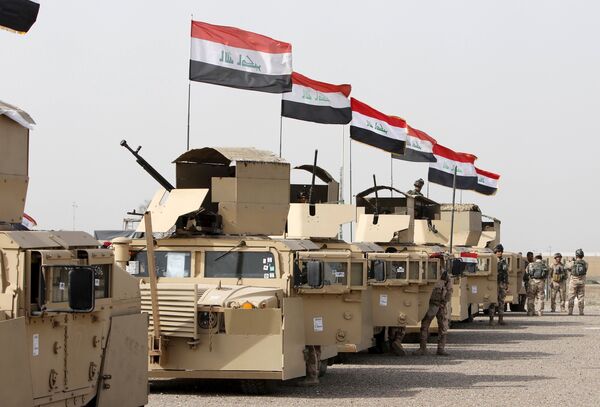 Iraqi security forces ride in vehicles travelling to Mosul to fight against militants of Islamic State at an Iraqi army base in Camp Taji in Baghdad, February 21, 2016
© REUTERS / Ahmed Saad
Newsfeed
0
New firstOld first
loader
LIVE
Заголовок открываемого материала
Access to the chat has been blocked for violating the rules . You will be able to participate again through:∞. If you do not agree with the blocking, please use the feedback form
The discussion is closed. You can participate in the discussion within 24 hours after the publication of the article.
To participate in the discussion
log in or register
loader
Chats
Заголовок открываемого материала
Worldwide
InternationalEnglishEnglishMundoEspañolSpanish
Europe
DeutschlandDeutschGermanFranceFrançaisFrenchΕλλάδαΕλληνικάGreekItaliaItalianoItalianČeská republikaČeštinaCzechPolskaPolskiPolishСрбиjаСрпскиSerbianLatvijaLatviešuLatvianLietuvaLietuviųLithuanianMoldovaMoldoveneascăMoldavianБеларусьБеларускiBelarusian
Transcaucasia
ԱրմենիաՀայերենArmenianАҧсныАҧсышәалаAbkhazХуссар ИрыстонИронауОssetianსაქართველოქართულიGeorgianAzərbaycanАzərbaycancaAzerbaijani
Middle East
Sputnik عربيArabicArabicTürkiyeTürkçeTurkishSputnik ایرانPersianPersianSputnik افغانستانDariDari
Central Asia
ҚазақстанҚазақ тіліKazakhКыргызстанКыргызчаKyrgyzOʻzbekistonЎзбекчаUzbekТоҷикистонТоҷикӣTajik
East & Southeast Asia
Việt NamTiếng ViệtVietnamese日本日本語Japanese中国中文Chinese
South America
BrasilPortuguêsPortuguese